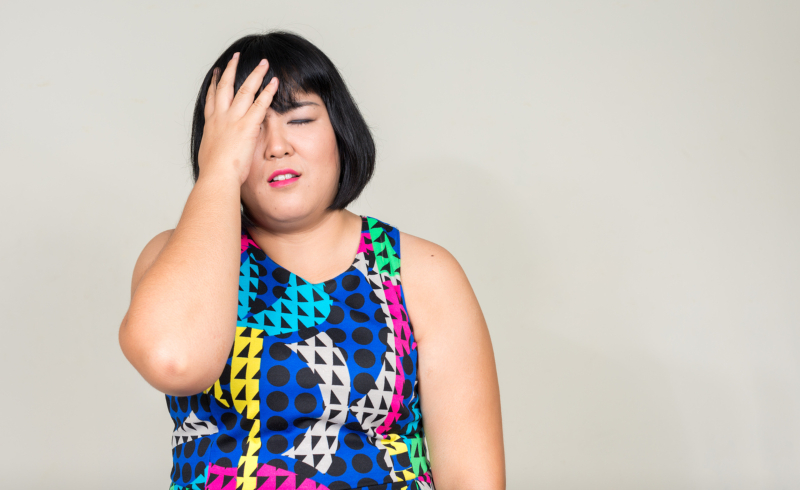 In September 2015, it’s seemed impossible to click on anything or browse any social media platform without running into a reaction to comedian Nicole Arbour’s fat-shaming video.

As most of us know by now, it was full of hateful words that mocked the pain of and stripped the humanity from others.

At its best, it was unoriginal — nothing that any fat person hasn’t heard a million times before.

What the video did do, however, was remind me of the importance of educating the masses on fat-shaming in general.

A thin, or straight size, person simply can’t tell a fat person that fat-shaming doesn’t exist when there are so many examples of it inherent in our everyday language, media, and culture.

Fat people are regularly shamed for their weight by doctors and told that being thin is morally superior. The oppression of fat people is very real, and it causes serious danger to our health and wellness.

The thing is that fat-shaming doesn’t help people get thinner, and the stigma that it creates does more damage than good to people of size, according to a study published in scientific journal PLOS ONE.

My hope is that most humans are trying to find out how to be an ally to people who are fat-shamed, and not purposefully causing harm to those around them.

However, sometimes we can be accidentally fat-shaming, and in need of rethinking the language and ideas that have been continuously drilled into our heads over the years.

1. ‘I mean, I totally get it if people are fat because of a medical condition or something.’

On first listen, this may not seem like such a terrible thing to say. You’re showing that you actually understand that the reasons bodies are fat can be very nuanced. Points, right?

Not so fast. Selectively granting people humanity and accepting them based on their body size is more than a little effed up. Acceptance towards others shouldn’t have anything to do with whether they’re fat because of their thyroid.

Fat acceptance has to happen with no exceptions, period.

This statement is incredibly problematic because it reinforces the idea that fatness and beauty are mutually exclusive.

Fat and beauty intersect, y’all. People are fat and beautiful. End of sentence.

3. ‘Please stop calling yourself fat. Don’t talk about yourself like that.’

Here’s the thing: Lots of people use the word “fat” as an insult. However, many fat people are reclaiming “fat” as a descriptor that’s empowering instead of a pejorative put-down.

You wouldn’t get mad at your six-foot-tall friend for calling themselves “tall,” would you? Please let people lovingly refer to themselves however they want.

Okay, wait: Didn’t I just say it’s totally cool for people to call themselves fat if they want to?

Yes! If they themselves are actually fat.

When straight-size people who have never suffered marginalization for being fat decide to co-opt the word, it takes away some of the power that actual people of size have over it.

When you’re simply full or feeling more aware of the space your body takes up, then say so.

Don’t turn fat bodies into a joke or use the word’s negative connotations as a way of fishing for compliments.

We all have body image struggles sometimes, but co-opting the word because you think it’s cute helps no one.

5. ‘You have such a pretty/handsome face!’

Well, fat people are more than used to being praised for the appearance/attractiveness of their faces and nothing more. It’s likely been used as a micro-aggression against all people of size.

Hands up if you’ve heard, “You’d be so beautiful if you lost a few pounds. You have such a pretty face!” Like, what’s so wrong with the rest of me?

We’ve endured years of humans either stating outright or subtly hinting that we could stand to lose a few pounds, which makes any diet talk difficult to be around at times.

It’s cool to feel happy about changes in your life that you’re satisfied with, but mentioning numbers and figures can be really detrimental to the mental health of those around you.

But how often do you really see before and after pictures featuring plus size bodies on the righthand side?

Here’s the deal: We know that people judge, mock, and shame others for their weight and appearance.

If your friend or someone you know decides to go out in a short skirt, bodycon dress, or sporting a tucked-in shirt, chances are they’ve already considered how breaking society’s plus-size fashion rules is going to affect them.

They know and obviously don’t care enough to let it stop them. So call their outfit cute and leave it at that.

Jessica Kane’s bathing suit photo and caption eloquently reminded us that wearing clothing in public should not be considered an act of bravery.

The more fat babes are able to just do their thing without it becoming a spectacle, the more normalized the sight will be.

Being aware of what we say and how we say it in order to be less shaming of the fat people we know and love doesn’t mean we’re not going to screw up from time to time.

So if you do happen to say something that’s fat shaming, just apologize, move on, and try to do better in the future.

But don’t forget to apologize. That alone will set you apart from 80 percent of the world.

Jodie Layne is a sex educator by day and a writer also by day. Her hobbies include re-considering an educational career and creating a B.A. in Kanye Studies, wishing there was a ShondaCon, trying to make the perfect “Meg Ryan Rom Com Feels” playlist, and preparing the imminent arrival of her certain anxiety-fueled demise. Connect with her on Twitter @JodieLayne.


Need more info? A complete list of benefits is here.

The post 7 Phrases You May Not Think Are Fat Shaming – But Definitely Are appeared first on The Good Men Project.