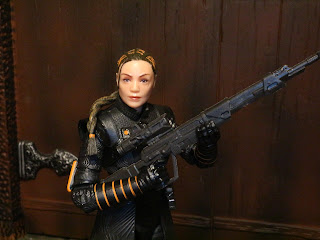 May is filled with Star Wars holidays and milestones so it's fitting that I have another review from Hasbro's Star Wars: The Black Series lined up. As I've mentioned in a few other reviews, I'm not really all that excited by many of Hasbro's Black Series offerings right now but when there's a character I want who is well done I'm still jumping in. Today we're checking out Fennec Shand from the most recent series of figures. The Mandalorian and The Book of Boba Fett have truly introduced some of the greatest Star Wars characters in recent memory and Fennec Shand is definitely one of those standouts. I've been excited about an action figure of her for quite some time and I'm glad to finally be able to add her to the collection. She's sourced to The Book of Boba Fett on the packaging but we all know she first appeared in The Mandalorian. Let's take a look at Fennec Shand, pretty much the deadliest person to appear in The Book of Boba Fett after the break... 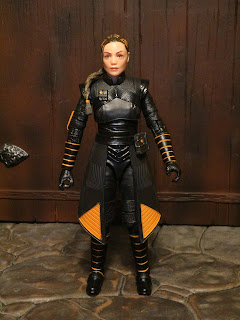 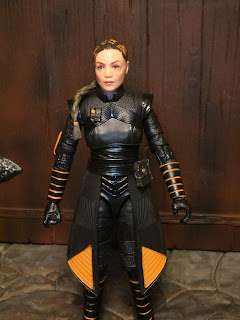 The Positives:
* Fennec Shand's outfit is understated but definitely incredibly cool. It's all black with orange highlights that really stand out and give you some warning. Like a venomous creature. Because Fennec Shand is dangerous. Seriously, this is one of the most intimidating bounty hunter outfits out there. There's so many cool textures on her outfit, too. Hasbro did a really nice job with her costume and all of the paint details. Everything is neat and clean. 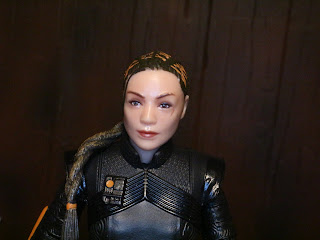 * The headsculpt isn't perfect (unlike Ming-Na Wen) but it's pretty good. It's definitely very recognizable as Ming-Na Wen as Fennec Shand and captures the characters attitude quite well. She even has the scar below her left eye! The work on the braids in her hair and her ponytail is also excellent. How far the Black Series has come, huh? 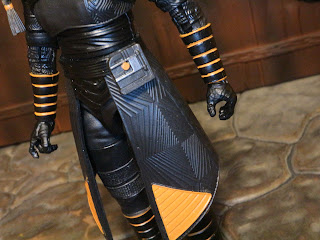 * Here's a close up shot to show off the details of Fennec's outfit. I love the panels on her skirt. Maybe they're blaster resistant? She also has some sort of device on her right hip. I'm not sure what it's for and I don't recall it being significant in the show. Any ideas? Man, I really miss the Star Wars visual dictionaries. 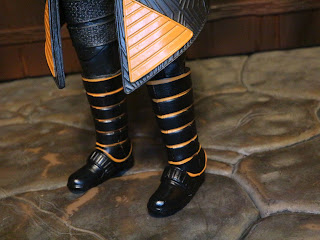 * Her boots are really cool, too, particularly the bright orange stripes around them. For such a small paint application and considering it's a lighter color on black plastic, the orange lines look really good. 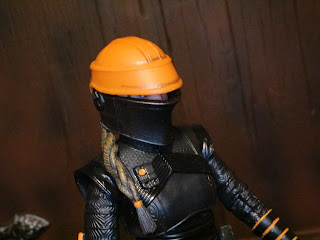 * Fennec Shand comes with her helmet which was inspired by medieval  jousting helmets. It's a really nice looking piece of equipment that fits well and looks proportionally accurate. While the visor slit isn't hinged or anything, it does seem to move a bit so you can position it with her eyes peeking out through the slit. 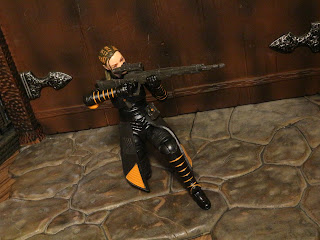 * The articulation is excellent on Fennec Shand. While the skirt portion of her coat may restrict her leg movement a bit it's not particularly noticeable or anything. She's solid, sturdy, and looks fantastic in sniping poses or just holding her rifle and standing around looking fabulous. 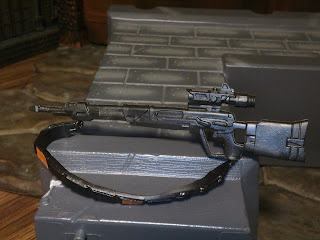 * Fennec Shand comes sporting her MK sniper rifle. It could definitely use a few more paint applications (and the knife she stores in the stock) but overall it's a nice sculpt with a functional strap that is removable via two pegs. 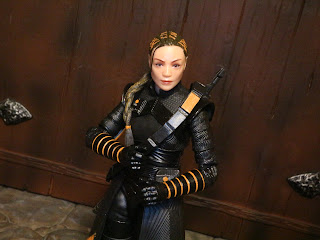 * The strap works well, allowing her to store the weapon across her chest when it's not in use. 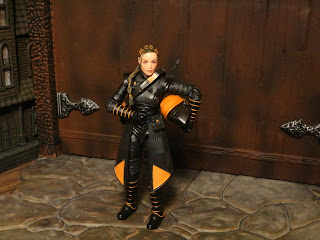 Fennec Shand turned out really well and definitely is one of the few "must have" figures currently released in the Black Series. I do wish she'd come with a few more weapons, like the dagger she keeps concealed in her rifle and a blaster pistol, but she doesn't feel utterly bare bones or anything. Hasbro did a great job with the likeness an the design of the outfit. She looks fantastic standing next to any group of bounty hunters or Mandalorians you have in your collection. She gets a solid Great from me.
This is the first figure of Fennec Shand I've reviewed. For more figures from Star Wars: The Black Series Phase IV check out the following:
332nd Ahsoka's Clone Trooper
Admiral Ackbar
Ahsoka Tano (The Clone Wars)