In the weeks since Little Womens Christmas 2019 release, Instagram has frothed like a copper pot with wholesome images of the titular sistersMeg, Jo, Beth, and Amy Marchgallivanting in wool capes, tartan scarves, colorful sontags (knitted shawls that crisscross the chest and tuck into a waistband), damask vests, billowing white cotton shirts, sun hats, newsboy caps, bonnets, and the occasional Parisian silk and hoop skirt combo. The Greta Gerwig-directed adaptation of Louisa May Alcotts classic 1860s novel about the March girls and their coming-of-age stories has prompted a style feeding frenzy.

Gerwigs Little Women (featuring Saoirse Ronan, Timothe Chalamet, Emma Stone, Florence Pugh, Laura Dern, and Meryl Streep) is primarily set in Concord, Massachusetts, a part of the northeastern United States that enjoys picturesque springs, summers, autumns, and winters. Perhaps owing to its holiday release and content, however, Little Women is resolutely a cold weather film. This makes it all the more remarkable that style trackers, who would typically spend January waxing poetic about warm weather spring trends, have shown such a strong affinity for all things Alcott.

The New York Post recently ran the article Everyones dressing like theyre in Little Women now. Like most reports on micro-trends, the Posts title is hyperbolic, but google Little Women style and youll find giddy headings like Man Repeller's 5 Ways to Steal Little Women Style Without Looking Like an Extra in a Period Piece and references to civil war chic (!!) in The Guardian. The shared critical and populist consensus seems to be that theres something undeniably appealing about English costume designer Jacqueline Durrans approach to the March sisters practical, yet individuated, 19th-century middle class, mix-and-match looks.

While Ive relished browsing Little Women style guides, Ive noticed that most are less cosplay more downplay when it comes to incorporating historical details. This is fair when one considers that todays contemporary artists are less likely to require a back buttoning, tailored linen smock la the apron Amy wears to protect her robins egg blue silk dress while painting in a Parisian atelier. And despite the prospective pleasure of pond skating in Jos (Ronans) tartan-lined crimson cape, layering it with a micro puff seems frankly prudent. Pragmatic concerns aside, the larger reality undermining proposed 21st-century interpretations is that looks from the film work better when seen in company.

Pragmatic concerns aside, the larger reality undermining proposed 21st-century interpretations is that looks from the film work better when seen in company.

As its title suggests, Little Women is very much a collective narrative. Jo may ultimately be the protagonist, but Gerwigs scriptarguably even more than Robin Swicords screenplay in Gillian Armstrongs 1994 film versionemphasizes the sisters relationships with one another, as well as with their mother, Marmee (Dern), and dashing neighbor, Laurie (Chalamet). Garment and styling choices frequently offer the viewers nuanced information about the sisters personalities, aspirations, and personal growth. For instance, we see Amy, the youngest, wearing a homemade faerie costume on the evening that Meg (Watson) and Jo attend the theatre with Laurie and his tutor, Mr. Brooke. Seeing prepubescent Amy in a costume emphasizes the precocity of her plea to be taken seriously and included in the older girls outing. Amy is not the only character to dress in costume: throughout the film, we routinely see the sisters experiment with fancy dress. In their youth, the Marches perform Jo's play, The Witchs Curse, attended by neighbors who marvel at the girls homemade costumes and stuck-on facial hair. They also often play at being characters from Charles Dickens The Pickwick Papers, sporting loose, oversized mens clothestop and bowler hats, suspenders, white shirts, and ribbon-like necktiesand hold pipes and talk shop in the Marches attic.

Personal style bordering on costume also becomes a space for negotiating mid-19th-century social politics. Gerwigs occasionally heavy-handed references to Alcotts feminist themes are more effortlessly rendered in Dorrans styling choices. Nominated for an Academy Award for her work in the film, Dorran incorporates costumes as a means for the characters to explore identity and relationships to class and gender. We see Meg try on a shrill and befrilled version of femininity at Sally Moffatts ball, borrowing a Pepto-Bismol pink gown, gloves, neck ribbons, and weaving lurid flowers into her hair. The look doesnt suit Megs down-to-earth persona, but she fairly says to Laurie: I know its silly, but please dont tell Jo. Let me have my fun tonight. Ill be desperately good for the rest of my life. 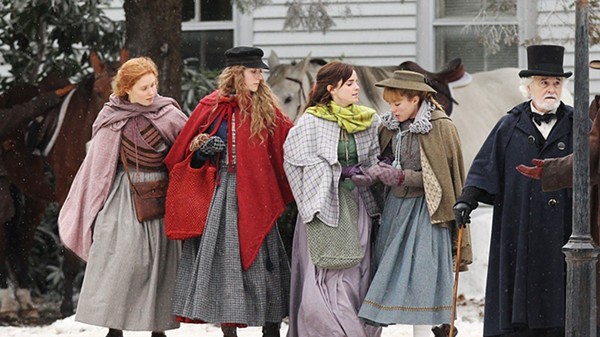 We also frequently see Jo in mens clothes, or with mens inspired styling, as when she writes wearing a vintage military jacket, or swaps accessories with Laurie. In The New Yorker, Rachel Syme astutely reflects upon the significance of Jo wearing Lauries buttercup-colored paisley vest during his failed quasi-proposal, but I also noticed the parallels between Jos style and Friedrich Bhaers, the European professor who eventually wins Jos heart. In an early scene, we see Jo and Friedrich practically matching in rumpled white collared shirts and sombre-hued woollensboth in dark vests, with a roomy, floor-length skirt for Jo and charcoal trousers for Friedrich. Youre on fire, Friedrich tells Jo, as she scribbles in her notebook, not noticing her hem has caught alight. I have the same habit, see? Friedrich shares, showing Jo his singed jacket to the audiences delight.

There are dozens more examples of mirroring, resonance, and dissonance amongst the characters styles, but crucially such instances come together to portray a rich and deeply interconnected world. The parallels between Jos and Lauries looks, and later Jos and Friedrichs, no doubt inform Jos family about her compatibility with both men. However, the costumes that work together to most replete effect are undoubtedly the sisters. After Beths tragic death, we see Meg and Amy escort Jo to meet Friedrich at the Concord train station; Jos sister tease and groom her, the small carriage a blur of familial excitement and comfortability. Watching Jo prepare to enter adulthood, the carriage shots remind us of an earlier moment in the film. In what is bound to become an iconic still from Gerwigs adaptation, the four sisters (Beth is still living at the time) move as a unit, arms intertwined, across a snowy lawn in colorful knits and outerwear. They are dressed distinctively, but one can easily imagine that scarves, capes, mittens, and satchels may have been swapped or handed-down over the years. Their style is shared, as are their joys and tribulations.