Dress codes are usually a very divisive topic—whether we’re talking about school uniforms or (in this particular case) how to dress at the workplace. We’ll be honest, we think that it’s up to everyone to decide what works best for them, whether they want to put on a snazzy suit every morning or go to work in a hoodie. Unfortunately, not everyone is as open to the idea of employee freedom when it comes to their sartorial decisions.

Redditor u/bear-mc, who works at an office that sells bulk goods to businesses, used to never have a problem wearing shorts whenever it was hot. All of that changed when he got a new boss who was a pedant through and through. Everything had to be done exactly as they wanted. To the letter. No exceptions.

Things came to a head when the boss threatened to fire the employee if they ever broke the dress code again. That’s when the redditor came up with a cunning plan to get back at the overly angry boss. A plan worthy of applause from the r/MaliciousCompliance subreddit. Read on for the full story of sweet, sweet revenge.

It makes a lot of sense for men to wear shorts when it’s hot. However, some bosses are incredibly strict and don’t allow them 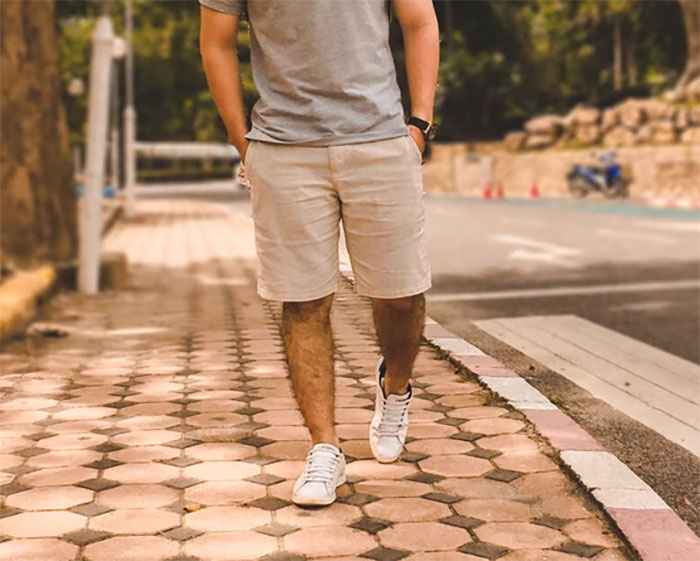 One boss threatened to fire an employee because they broke the dress code. However, the story took an unexpected twist 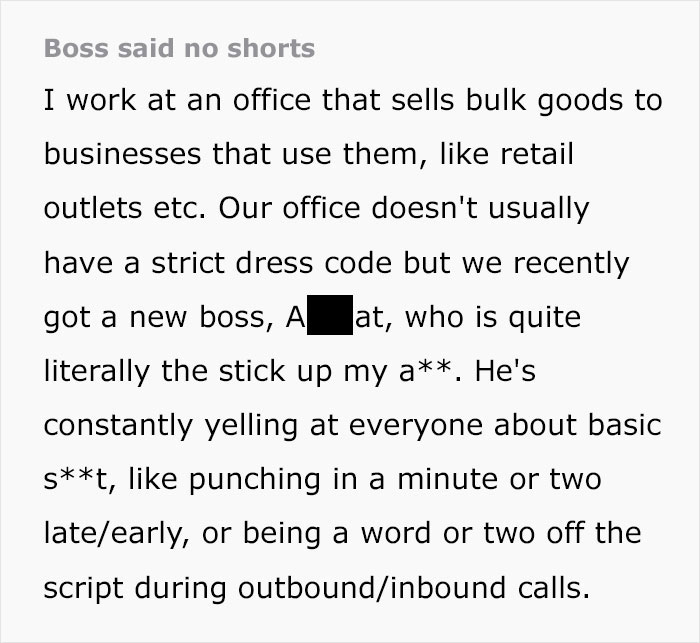 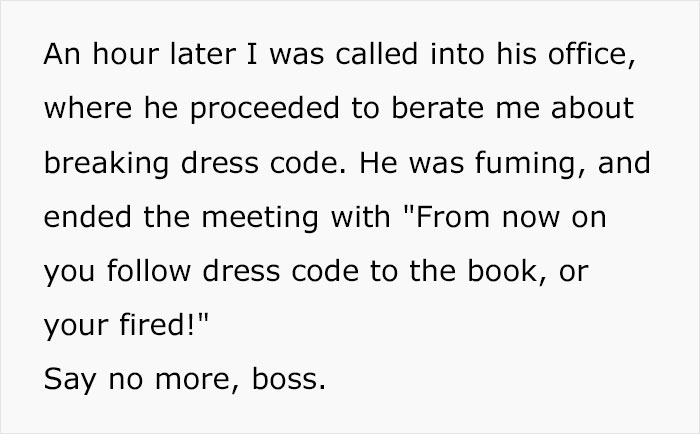 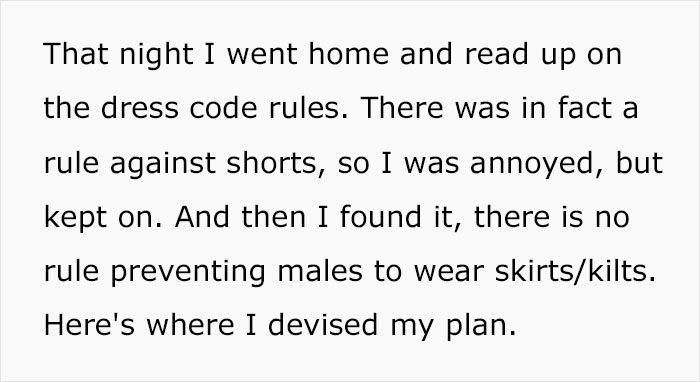 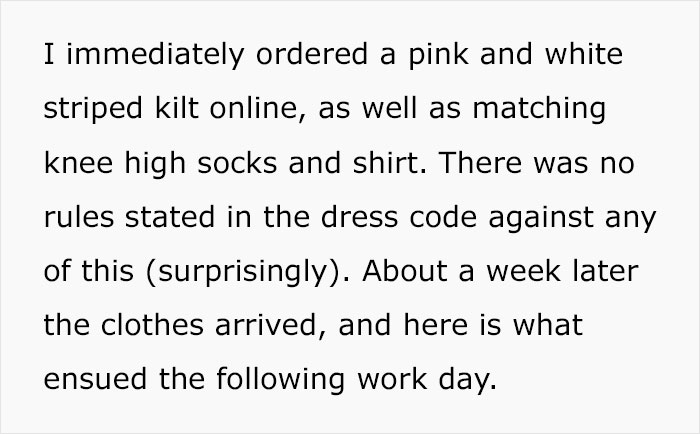 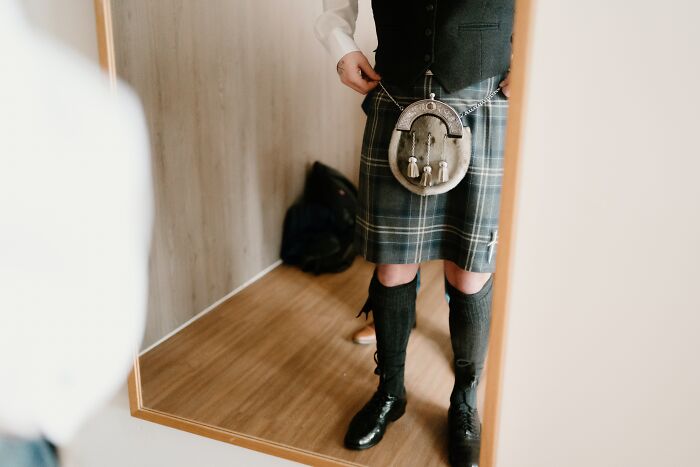 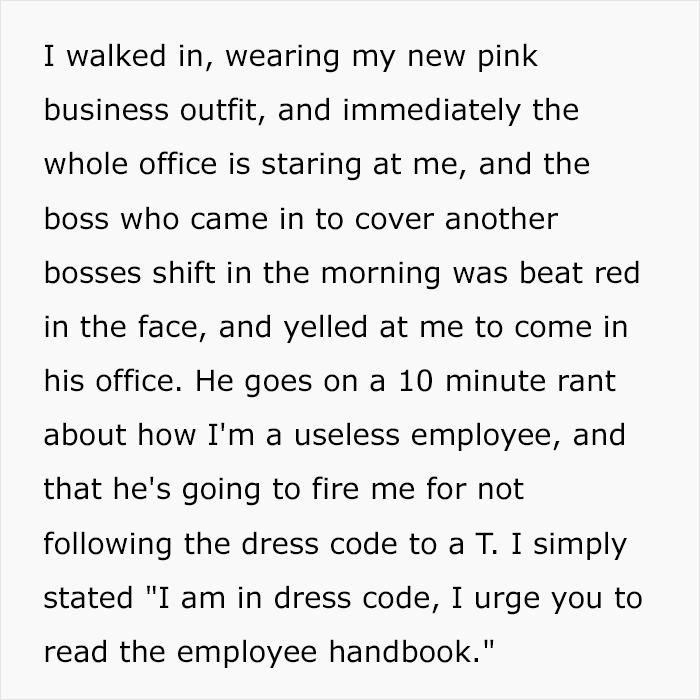 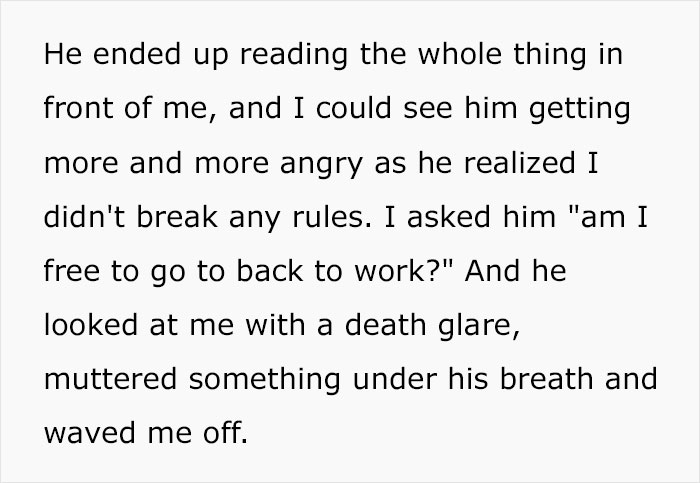 Redditor u/bear-mc realized that the company actually did have a specific rule about not wearing shorts. So, in the past, his other bosses would simply use common sense when it came to wearing shorts during heatwaves. However, this new superior was very technical and thought the rules as written were sacred.

So the only way to get them to stop their crusade against common sense was to beat them at their own game. That’s when the redditor realized that there wasn’t a rule that disallowed men from wearing skirts or kilts. And that’s when they decided to risk it all and come into work in a striking pink business outfit.

The boss was, naturally, flabbergasted and raged at the employee. Once again they threatened to fire him. But their overt anger quickly turned to quiet frustration when they were told to read the employee handbook. Sure, shorts were technically not allowed. But nobody ever said that a man couldn’t wear a kilt or a skirt (with knee-high socks and a matching shirt, of course).

The employee got his revenge, the boss (hopefully) learned his lesson, and the redditors from r/MaliciousCompliance shared their opinions and experiences at work when it came to clothing. At the end of the day, giving employees a bit of freedom when it comes to dressing how they prefer might be a good thing. Employees can be more creative when they’re not restricted by too many rules. What’s more, you’d be prioritizing your workers’ comfort which is always a plus.

This isn’t the only time that Bored Panda has written about dress codes. We’ve previously looked at how sexist some dress codes are in schools, as well as how some gym employees can make their clients feel ashamed for what they wear.

In short, dress codes are a very hot topic pretty much everywhere, not just in the workplace. And the common thread we’ve seen everywhere is that following the rules to the letter means that a lot of nuances are lost and can lead to people getting very hurt, emotionally. The rules are there for a reason, but they shouldn’t be followed blindly, without realizing that they affect real live human beings with their own thoughts, feelings, opinions, needs, and fashion senses.

Actress and Screenwriter Nicole Ciravolo told Bored Panda previously that she was treated very poorly as a high school student by the faculty when it came to the dress code. “I often felt shamed by female faculty and sexualized by male faculty,” she said.

In Nicole’s opinion, dress codes, at least in schools, are enforced for the benefit of the faculty, not the students.

“They often have elements of racism and sexism disguised as ‘professional’ (i.e. sagging pants or no bra straps showing). In my own experience, skirt/shorts length or bra straps don’t distract other students but instead the teachers. It’s sickening to think back to being a 15-year-old minor and getting sent to the office by a man in his sixties because my shorts made him uncomfortable. Those types of people should not be teaching minors.”

Have you ever been in a situation where your boss let you have it for what you wore to work, dear Pandas? What do you think of mandatory dress codes in general? Share your thoughts in the comments. 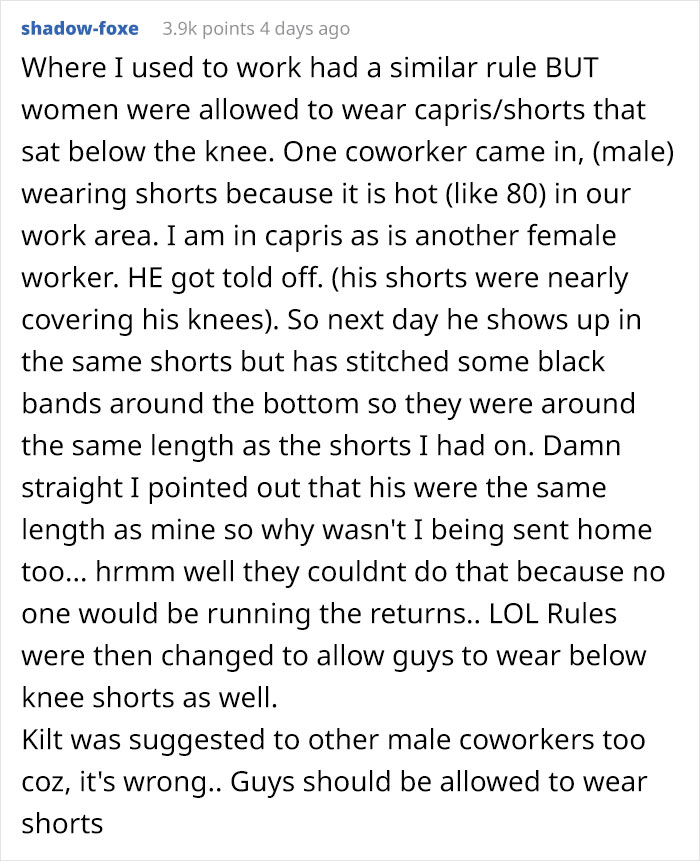 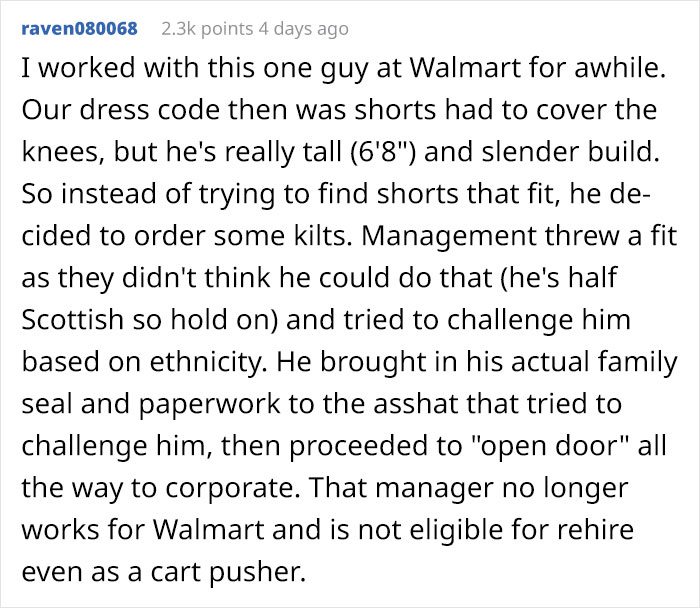 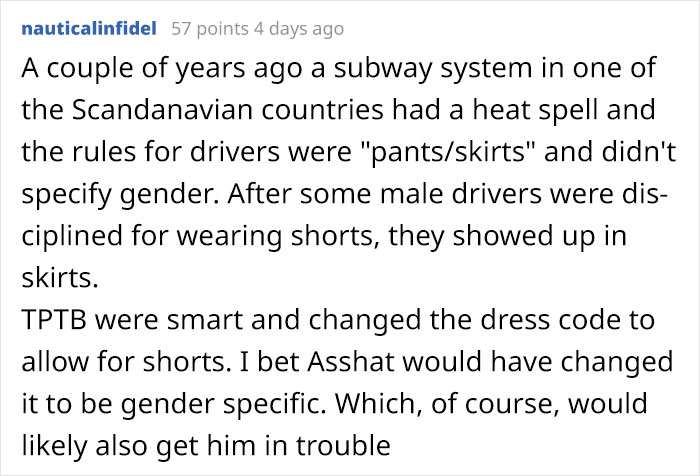 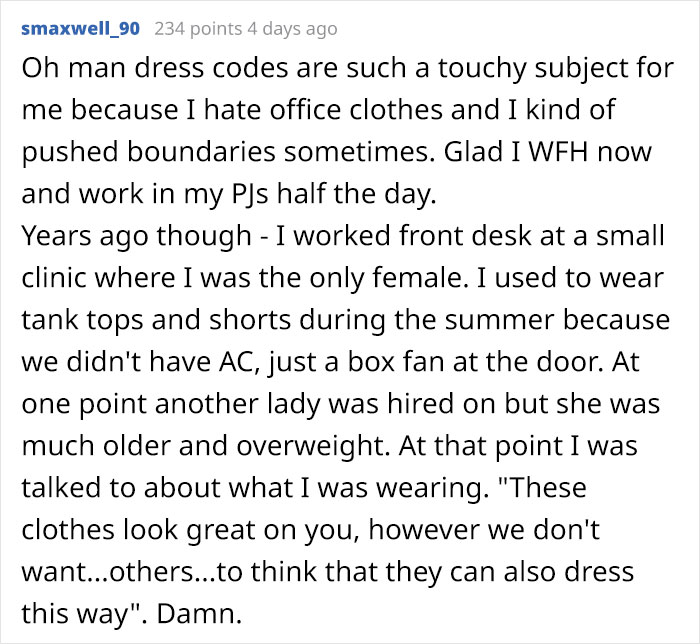 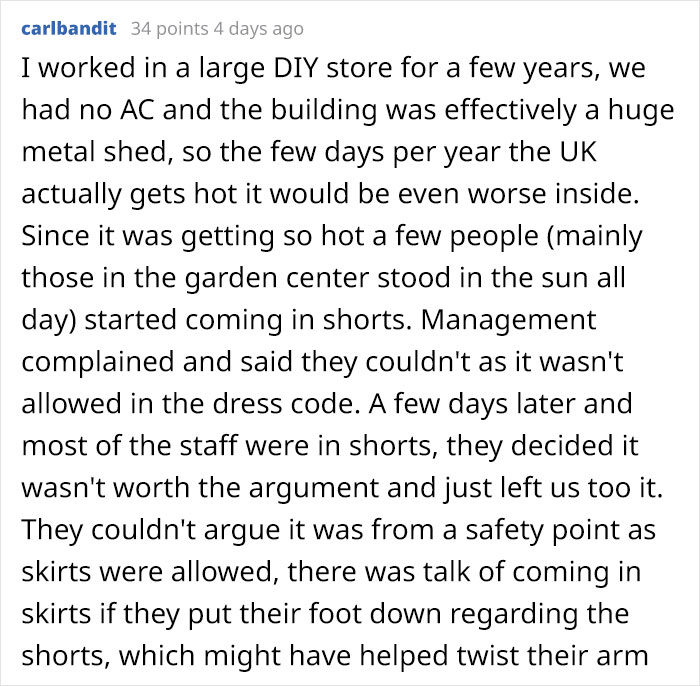 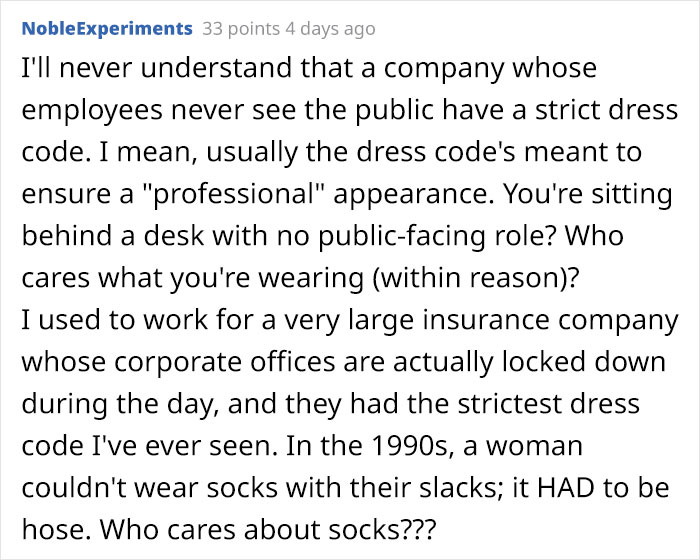 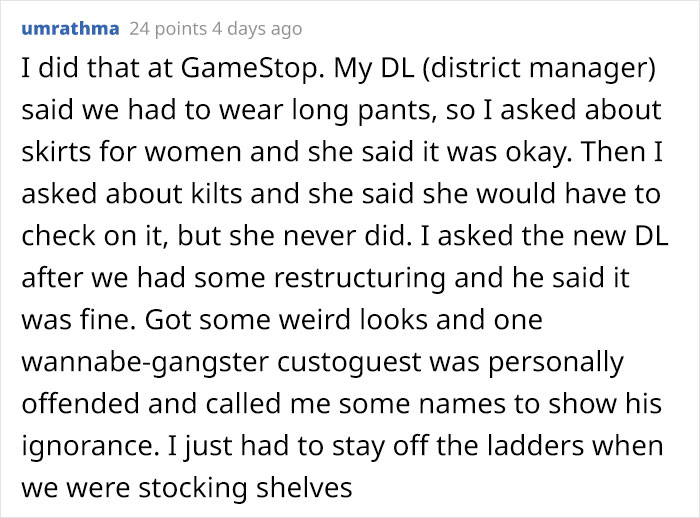 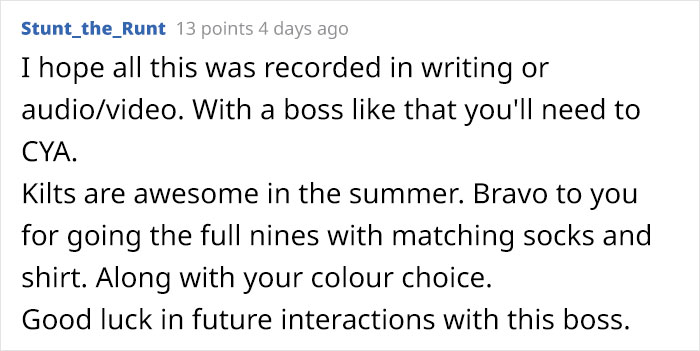 The post Angry Boss Threatens To Fire Employee If He Ever Wears Shorts Again, He Follows The Company's Dress Code To The Letter To Get His Revenge first appeared on Bored Panda.