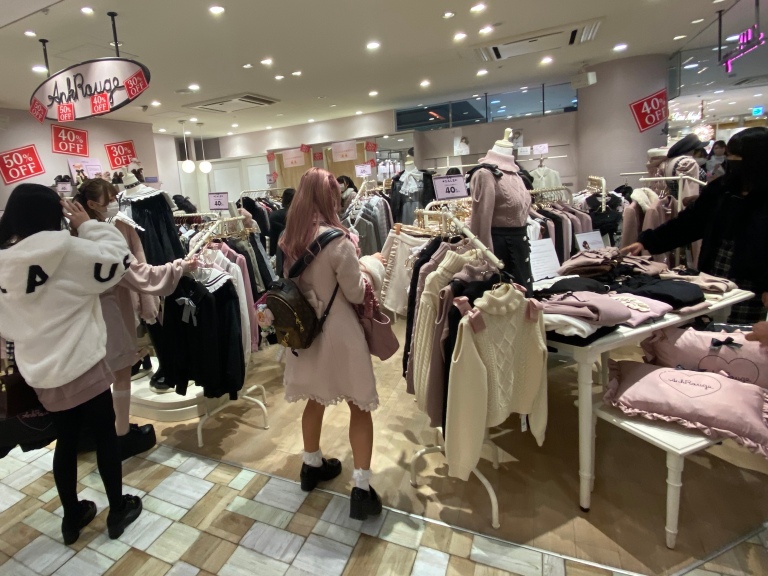 Ikuna takes a chance on a lucky bag she’s in the market, but not the target market, for.

SoraNews24 headquarters is located in the Shinjuku neighborhood, and a side effect of working in the heart of downtown Tokyo is that we get regular updates on current fashion trends just by walking to the office. Recently, our Japanese-language reporter Ikuna Kamezawa has been noticing bigger and bigger crowds of teen and early-20s shoppers at Ank Rouge. “Their clothes are like a blend of classic cuteness with a dash of gothic Lolita style,”Ikuna describes the brand, “with all sorts of frills and ribbons.”

Ikuna’s been wanting to try the brand’s styles for herself, but at the same time, she’s a little self-conscious about whether she, a woman in her 30s, can pull off such a youthful look. So when she found out that Ank Rouge was offering a New Year’s fukubukuro/lucky bag, she figured this was the perfect opportunity to find out.

▼ Yes, even the Ank Rouge lucky bag has frills. 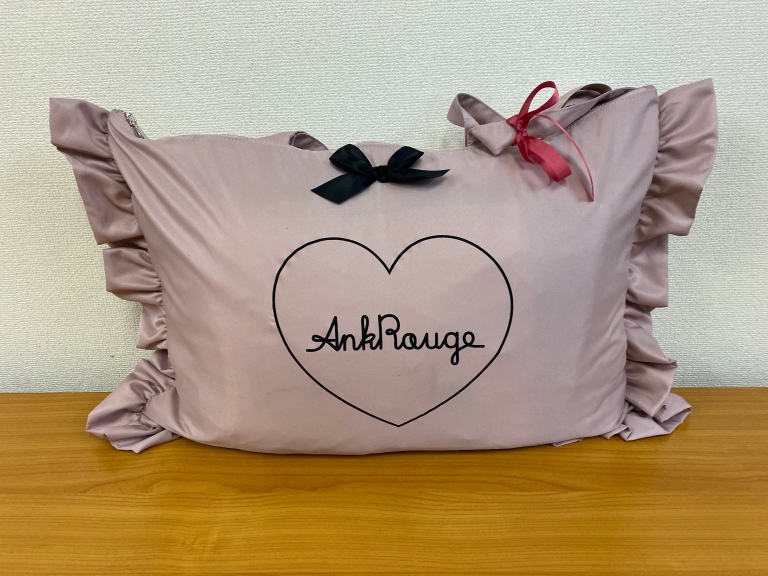 For starters, the blind-buy lucky bag represents a savings, since the total value of its contents is more than the bag’s 16,500-yen (US$143) asking price. In addition, since it already contains a complete ensemble, she wouldn’t have to feel awkward spending an extended time browsing a store where every other shopper is younger than her by a decade or more. And finally, if she started to feel embarrassed while at the register, she could just say she was picking up the fukubukuro for her niece or something. 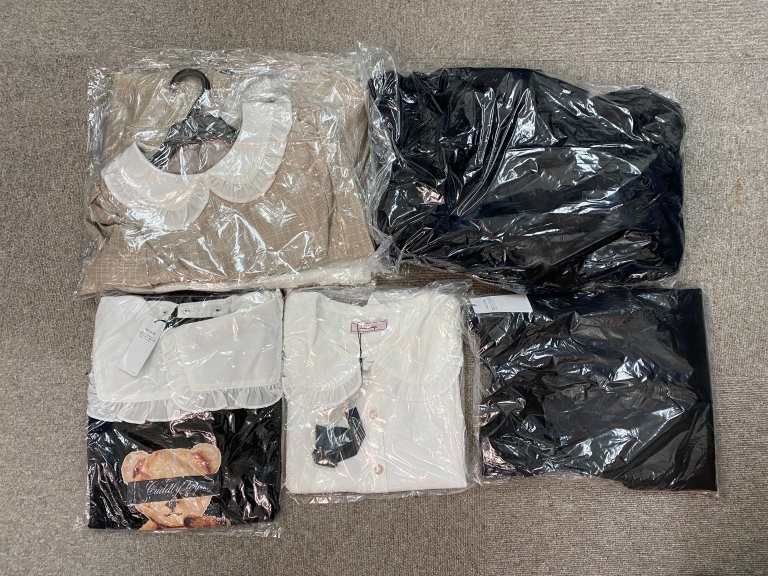 Back at the office and away from the public’s eyes, Ikuna opened up her lucky bag and spread out its six items, which were exactly the sort of styles she’d been expecting and hoping for. There was a short black coat (with included a hair ribbon, of course)… 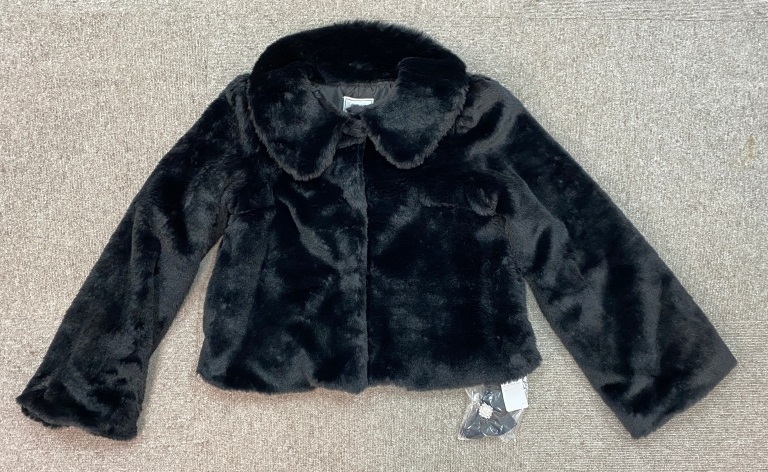 …a dress (with frilly collar, of course) and skirt… 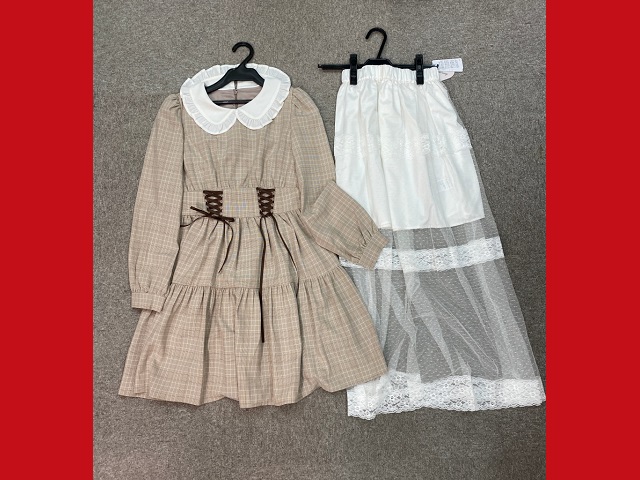 …another frilly collar, this time as part of a teddy bear-print top… 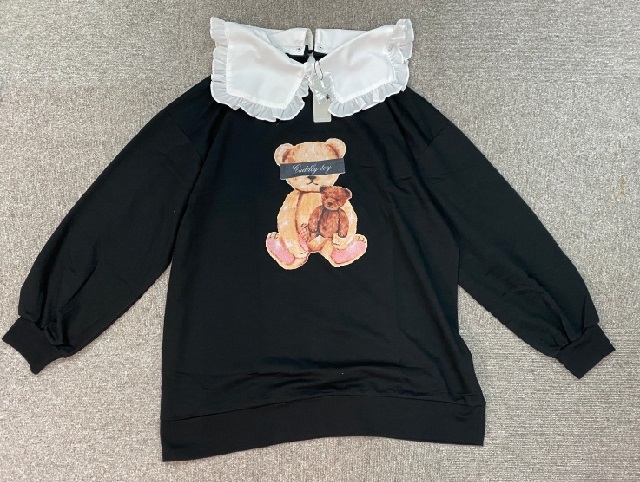 …a blouse with a frilly collar and a ribbon… 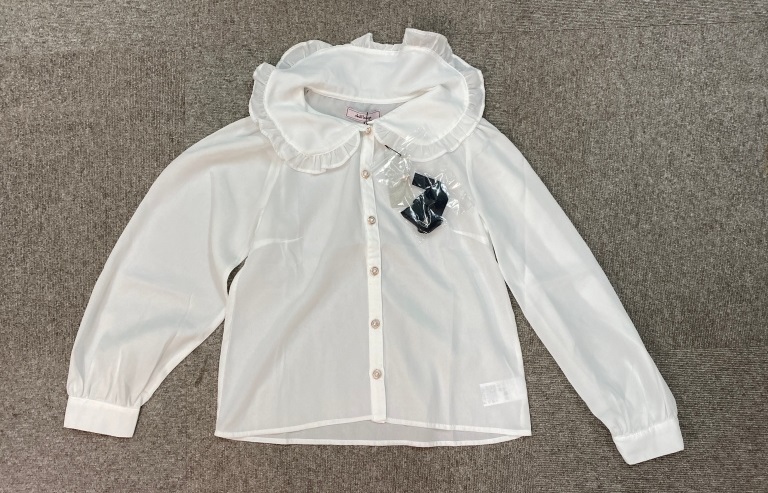 …and, finally, a miniskirt with shoulder straps. 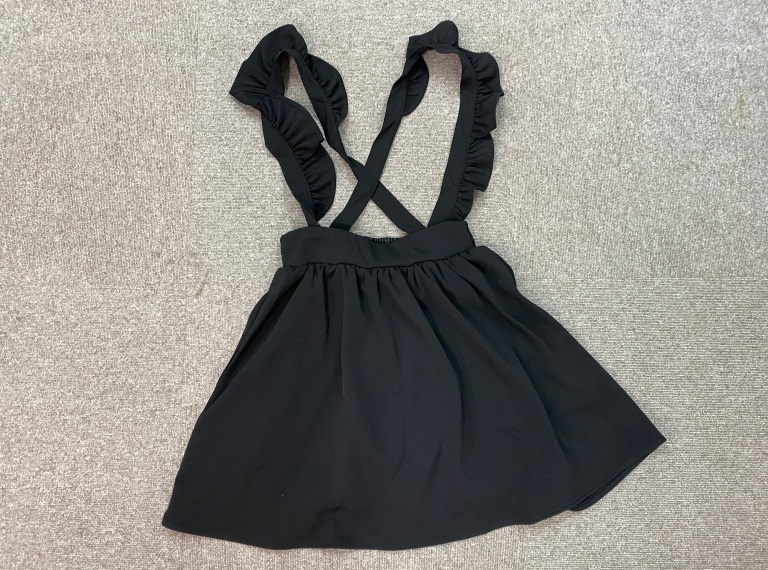 They all looked cute, but the question Ikuna wanted to answer was whether or not they’d look cute on her. She started by slipping on the dress and jacket… 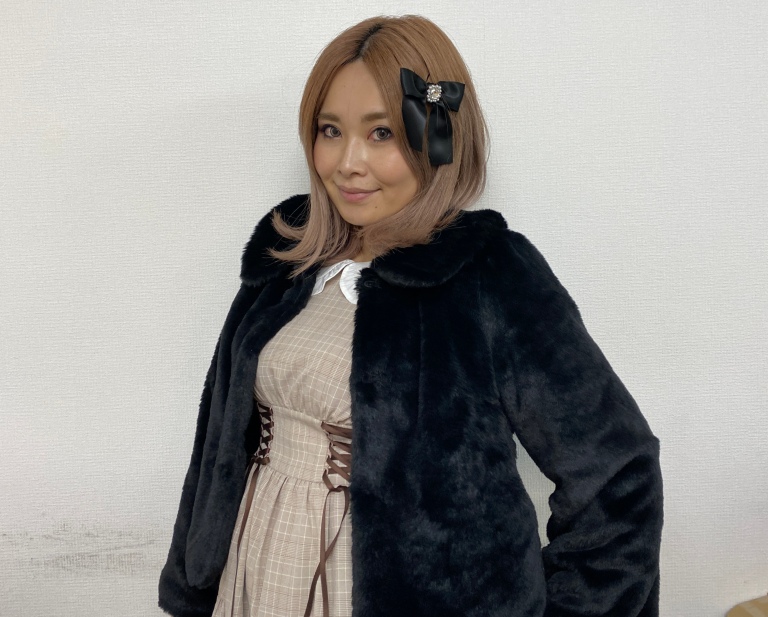 …and so far, so good! While there’s definitely a youthful, traditional girlishness to Ank Rouge’s designs, the understated colors of the pieces meant they didn’t look out of place on a woman of Ikuna’s mature sophistication. 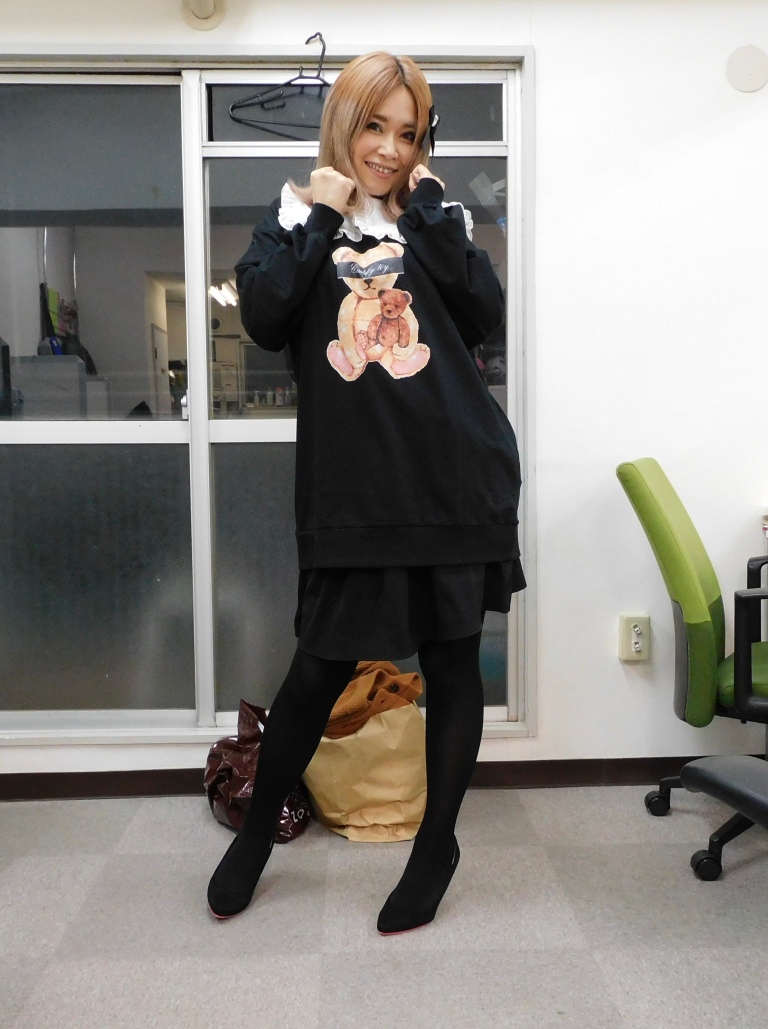 Ikuna had similar success with the teddy bear top. Sure, there’s a bit more flashiness here , but again, the elegant black-and-white motif for the non-ursine elements suit an adult lady just fine. 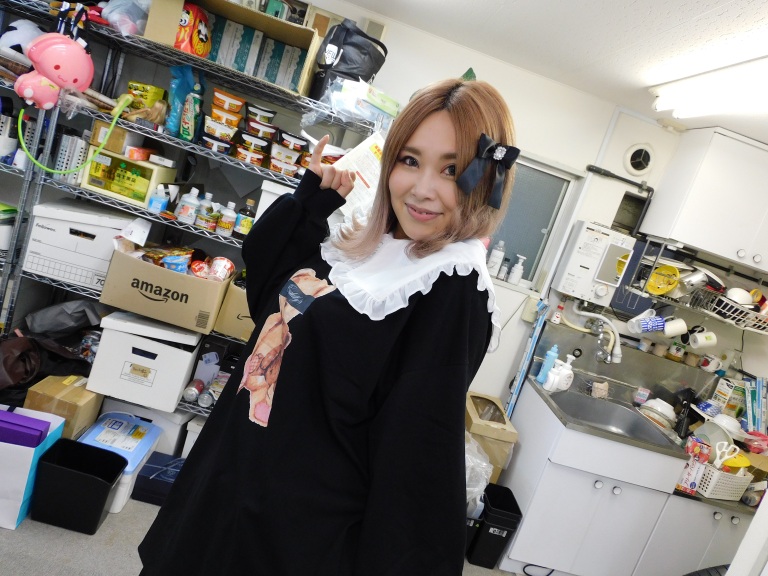 As a matter of fact, Ikuna’s fashion transformation was going so smoothly that fellow reporter Seiji Nakazawa volunteered as cameraman for an extended photo shoot, since he’s a supportive coworker, has a personal soft spot for frilly fashions, and, like a number of reporters in our office on any given day, was looking for excuses to not have to do his own work. 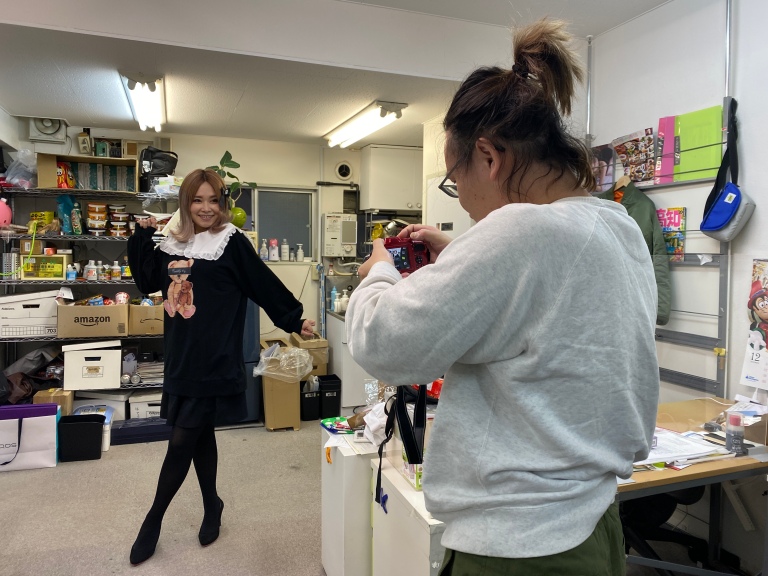 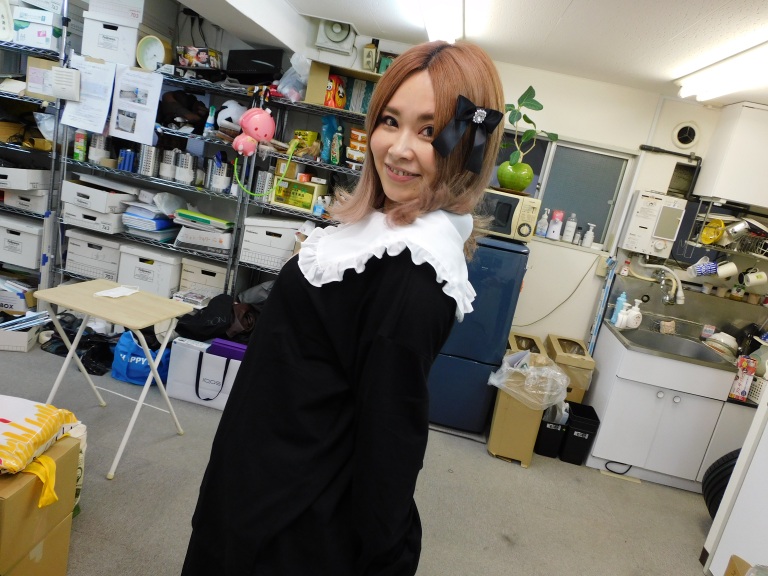 ▼ We’re not sure if the combination of Seiji’s willingness to help out with other people’s projects and his unwillingness to finish his own makes him industrious or lazy, but it does make him one of us. 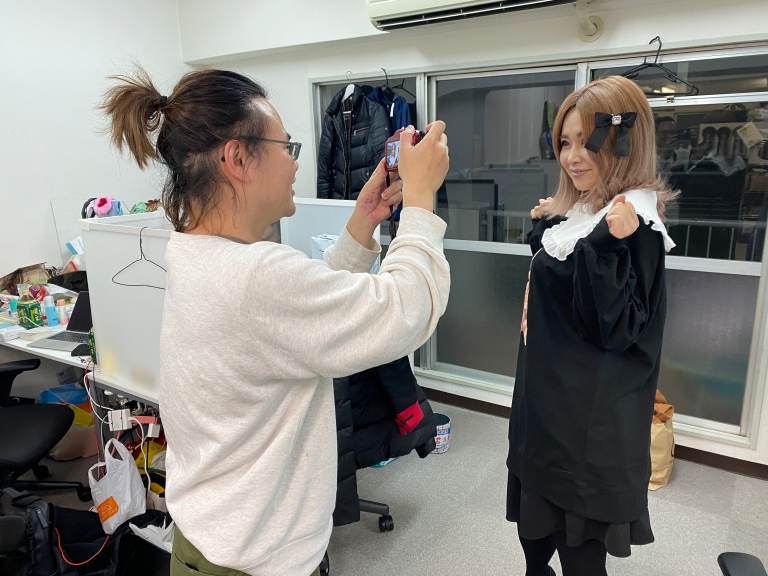 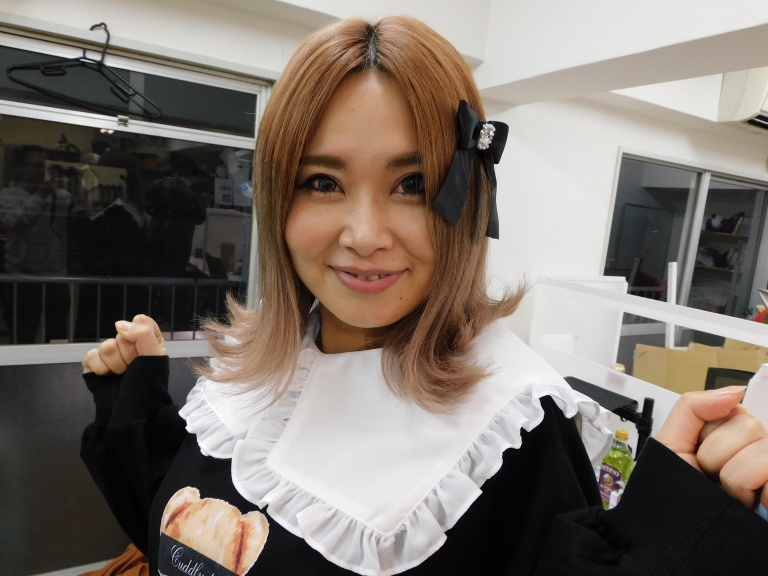 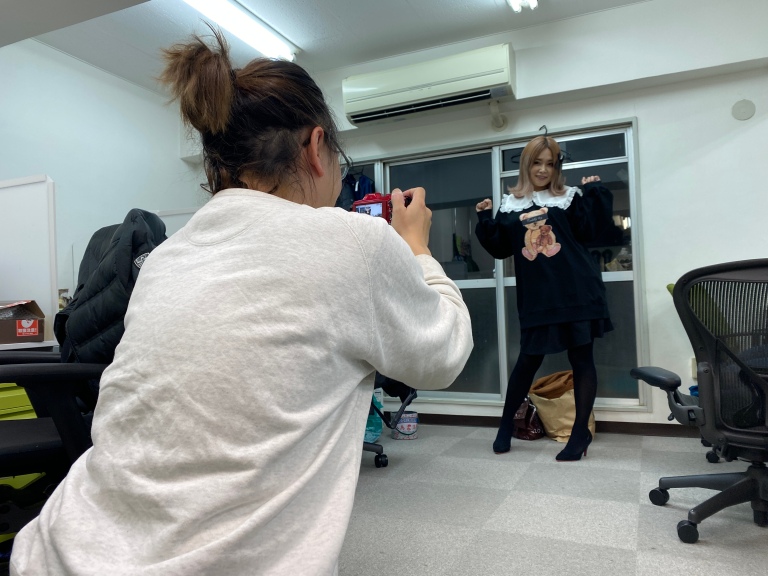 As for the skirt, length-wise it doesn’t really work all that well with the dress, and so Ikuna is going to have to find something else in her closet to pair it with, but that’s really the only problem she ran into. 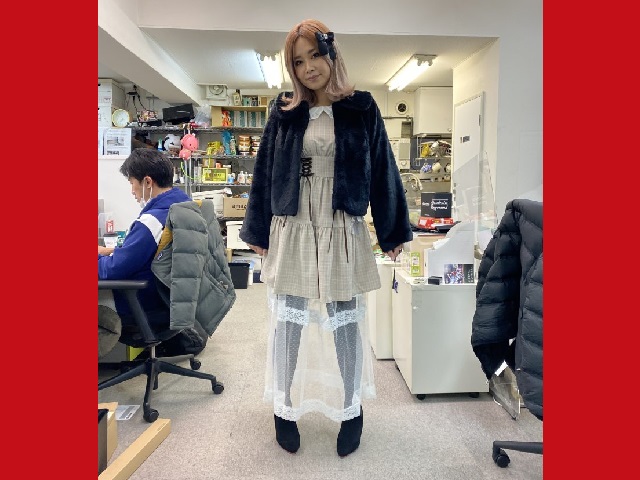 Well, that and her lingering self-consciousness, since while she likes the way she looks, she’s still not 100-percent sure about wearing these fashions at her age. Personally, though, we think she looks fine, and this is far, far from the most shocking wardrobe choice made by a SoraNews24 reporter, so she gets a thumbs-up from us.