"What is more delightful than a Christmas romance? If you love the warmth of a love story aglow with Christmas charm and sparkling with snowflakes and tinsel, The Mistletoe Contract will not disappoint." Felicia B., Goodreads 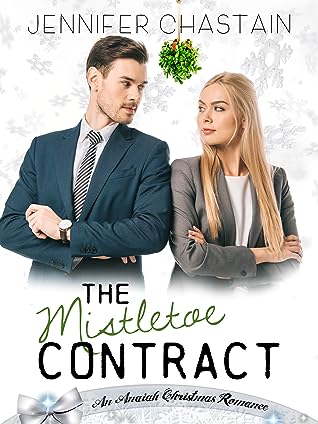 Description:
He needs a wife. She needs money. Is their modern-day marriage an answer to their prayers or a disaster waiting to happen?
Confirmed bachelor, Nathan Rutledge shut his heart to romance when he was forced to break the heart of the only woman he ever truly loved. Now, with his father’s retirement from the family conglomerate, the torch has been passed to him. But there are two problems—first, he needs a wife in order to take over the family business. Second, someone has been embezzling company funds. With the pressure mounting, and time expiring to find both a wife he can trust and the thief, Nate needs a Christmas miracle.
Forensic Accountant, Meredith Mitchell’s life is in a shambles. Her mother needs a lifesaving transplant, Mom’s medical bills have bankrupted Meredith’s meager savings, and she’s sold everything of value, but it’s still not enough. To make matters worse, she’s now tasked with discovering accounting errors for a new client—none other than Nathan Rutledge—the same man who gave her a broken heart for Christmas eight years ago.
Meredith wants to run. Nate wants the chance to right his wrongs. So, naturally, when he proposes a modern-day marriage of convenience, she balks at the idea. But he desperately needs a wife, and she really needs the money he offers. Is this the answer to her prayers? Or will this mutually beneficial arrangement re-open old wounds that can’t be healed?
EXCERPT
Pull it together, Meredith. You can do this. It’s only Nate’s dad.
A door slammed down the hallway, and footsteps echoed off the hardwood floors.
And then, the last person she expected to see was standing in front of her, his arms crossed over his impressive chest. Not a dark hair out of place nor a wrinkle in his charcoal-gray suit.
Her Christmas past had come back to haunt her.
“Meredith. Tori’s not here. She’s at work.” Nate’s deep blue eyes narrowed to slits. His harsh tone along with the fire in his eyes pulled her out of her daydreams.
“I’m not here for Tori.” Meredith rose, thankful the heels on her boots added three inches to her height.
Standing on shaky legs, she patted her updo for stray hairs. She smoothed her skirt, stiffened her spine, and swallowed past the boulder lodged in her throat. No fear. Facing him, she forced herself to smile.
“Nathan Rutledge. It’s… good to see you again.” She held out her hand but let it fall when he ignored her friendly attempt.
How rude.
So, they had history—big deal. She was mature enough to put it behind her. But maybe, he couldn’t. Meredith lifted her chin. “I was expecting to meet with your father.”
Nate rocked back on his heels, hands in his pockets. “Yes, well, obviously, he’s not here. I’m now the acting CEO.”
Her eyebrows rose. “Oh, I didn’t know. My supervisor only said I was supposed to meet with Mr. Rutledge.”
Goodreads ** Amazon

About the author:
Jennifer Chastain is a member of ACFW, ACFW-NC, and My Book Therapy/Novel Academy. Several of her other stories were finalists in the Blue Ridge Mountains Foundations contest and she was a finalist in the Touched by Love contest, sponsored by the Faith, Hope, and Love Christian Writers. Her contemporary romance stories contain the themes of redemption, grace, and forgiveness.
A hopeful romantic, Jennifer loves dark chocolate, Diet Coke, old movies and a good romantic movie. She loves to experiment with new recipes in the kitchen and when not cooking, she’s reading or conducting more research for her stories. Growing up in the snowy North, Christmas has always been her favorite holiday, with the scents of cinnamon, vanilla, and pine scenting the air.
She and her husband have been married for over 25 years and they are permitted to co-exist with their black rescue cat.
Website ** Goodreads ** Instagram ** Facebook ** Twitter ** Newsletter
Author's Giveaway:
the more you comment, the better your chances of winning
a Rafflecopter giveaway