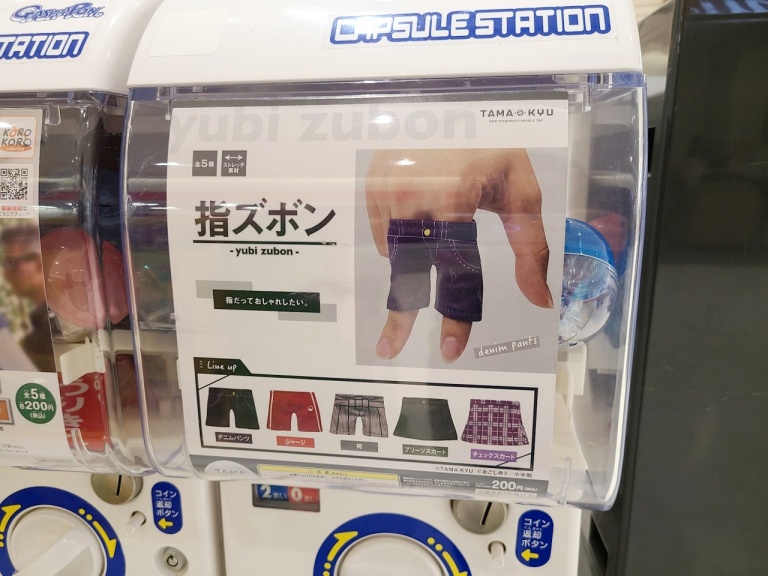 Japanese capsule toy maker Tama-Kyu is no stranger to a little wordplay in promoting its strange gacha goodies, They’re the company that created protection-from-social-media-flame-war amulets with a fiery motif and surprising moving mountain figurines inspired by the Japanese expression “The mountain has moved.”

So when we came cross Tama-Kyu’s newest offering, called Yubi Zubon, we thought there might be some playful double meaning to the product name. Taken at face value, yubi means “fingers” and zubon means “pants,” but if you interpret those words another way, then maybe…

Actually, no, there is no other meaning to Yubi Zubon other than “Finger Pants,” and that’s exactly what they are. 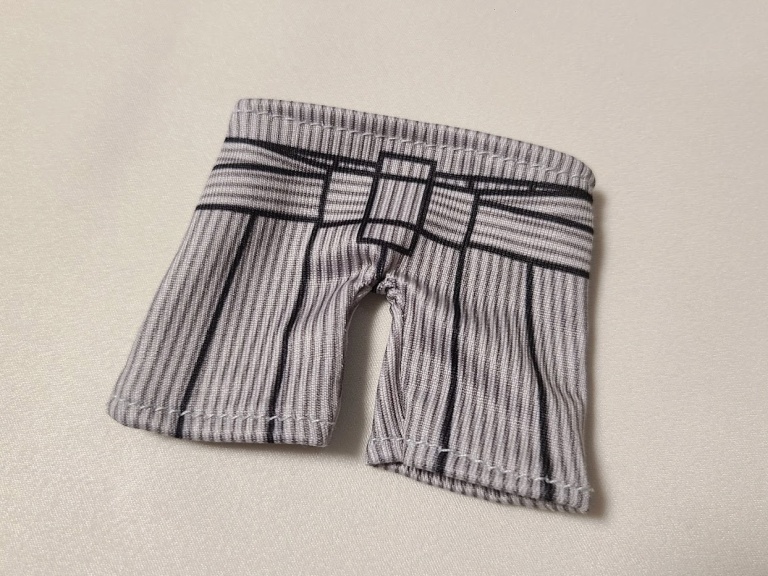 “Even your fingers want to be fashionable!” says Tama-Kyu in a brilliant bit of marketing, because as far-fetched as that claim may sound, we can’t ever recall our fingers saying they don’t want to be fashionable. Maybe instead of letting out fingers flitter around nakedly, they’d be happier with proper pants. We can’t say for sure until we’ve tried them, right?

That may not sound like particularly sound logic, but if you think that’s ever been a prerequisite for our purchasing decisions, you must be new around here. 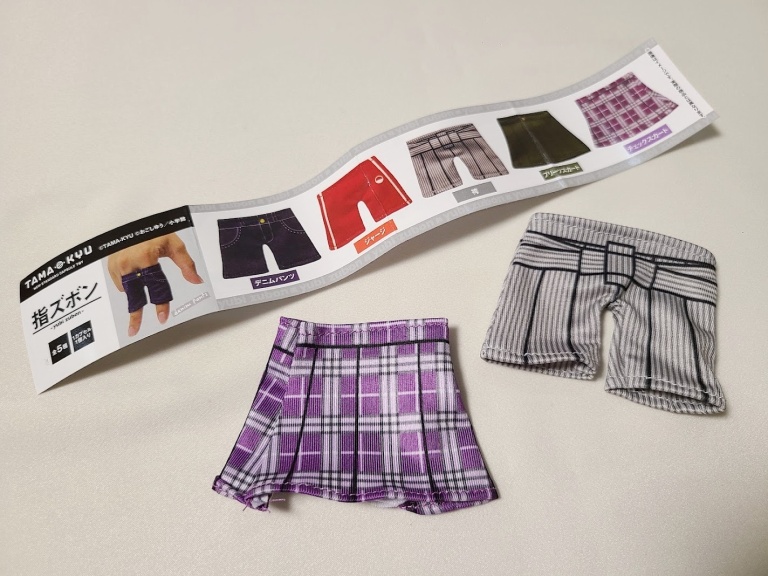 At just 200 yen (US$1.75) a pop, Yubi Zubon are more affordable than the average gacha toys, so we bought two pairs. It turned out, though, that Finger Pants is kind of a misnomer, because out of the five possible designs, two of them are actually skirts. 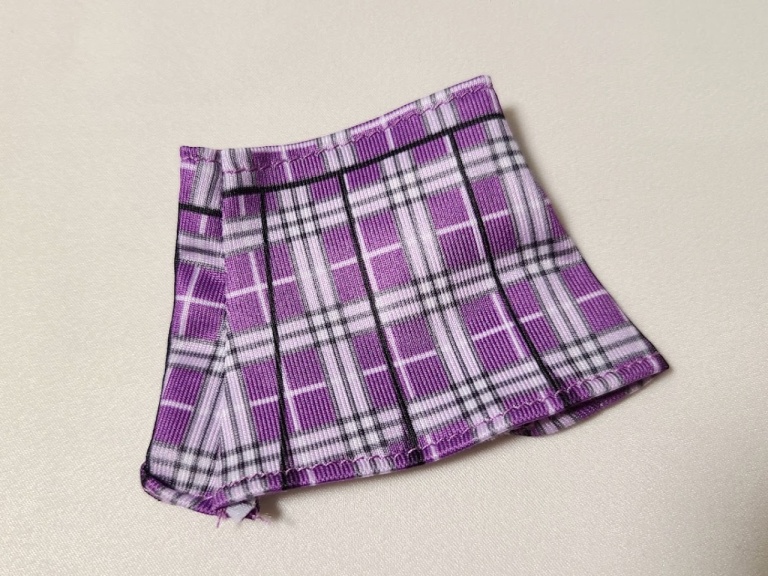 The complete lineup consists of a pair of jeans, shorts, hakama (billowy pants worn with men’s kimono), a pleated skirt, and a check-pattern skirt. On our two turns of the gacha crank, we got the hakama and the check skirt, and we wasted no time slipping them on. 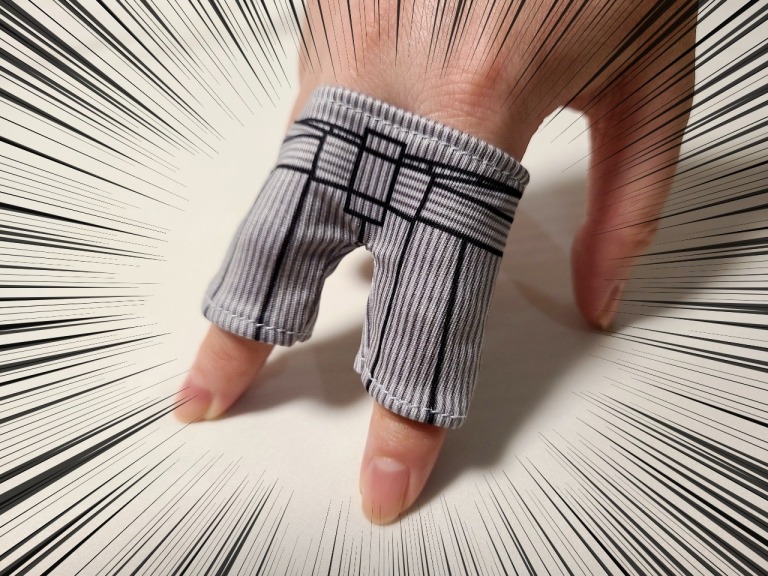 Having never worn finger pants before, we don’t have any frame of reference for what the standards should be in terms of fit and functionality, but the material is smooth and soft, and our fingers felt comfortably relaxed. We did, however, feel a little self-conscious when we tried on the skirt, partly because the back of our hand felt topless, and partly because we were suddenly extra aware of the hair on our fingers. 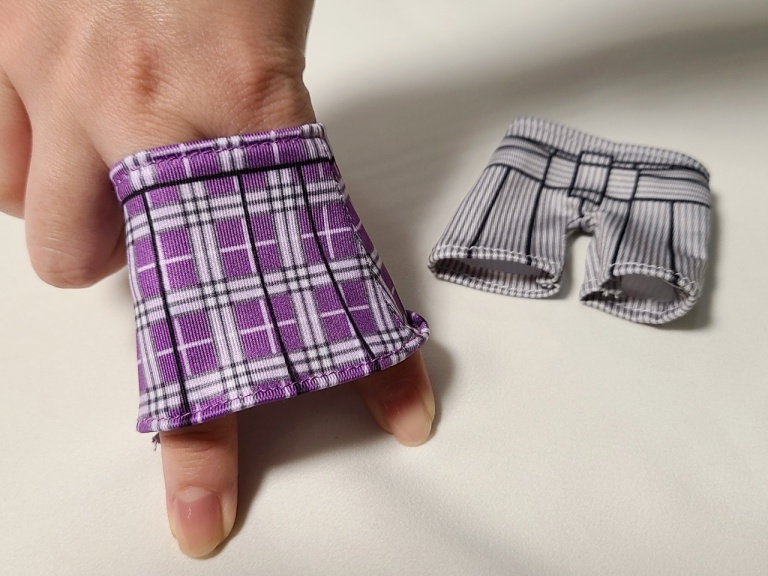 Perhaps predicting that not everyone is quite ready for a look as avant-garde as putting pants and skirts on your fingers, Tama-Kyu says that the Yubi Zubon can also be used as clothing for figurines, so we drafted a pair of Sylvanian Family toys to serve as models. 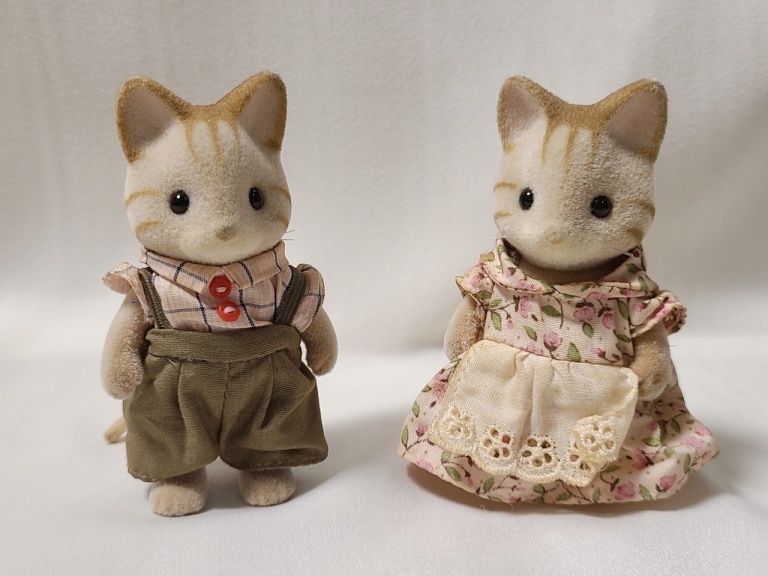 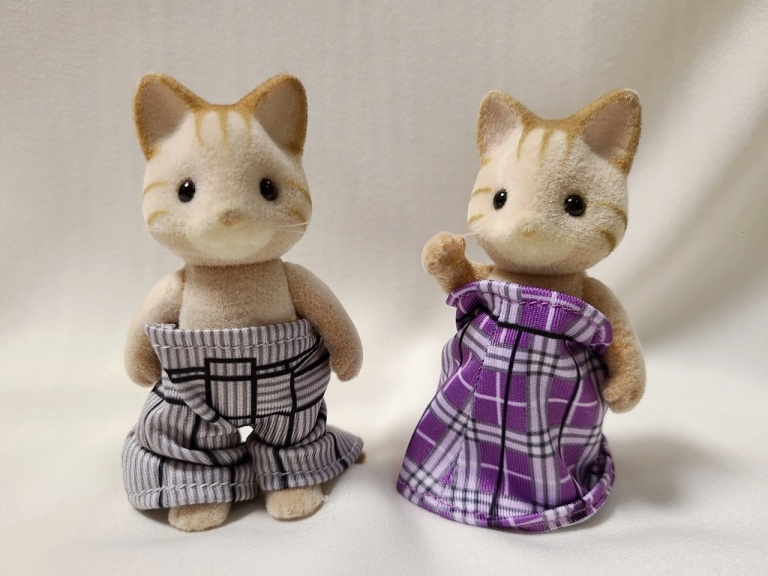 While they kind of fit, they’re extra baggy and give off a very different feeling than the twee aesthetics of their normal clothes. So in the end, it seems like you really should use your Finger Pants on your fingers. As for whether you should slide them down before using Tama-Kyu’s Japanese-toilet water bottle cap, that’s a fashion/etiquette question we’re still not sure about the answer to.