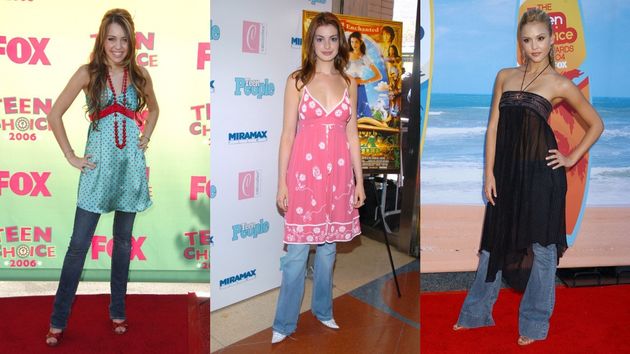 When talking about early 2000s style trends, you’d be remiss not to mention the reign of “jeans and a going-out top.”

This outfit staple allowed people to show off designer jeans while experimenting with a variety of tops from fast-fashion retailers. But a related trend brought this two-piece look to another level: dresses over jeans.

Between 2002 and 2005 in particular, celebrities paired an array of dresses with denim during public appearances. The dresses ranged from colorful halters to neutral minis to those classic strapless terrycloth numbers from Juicy Couture. In 2019, actor Jessica Alba poked fun at the look when she posted a Instagram roundup of photos of herself wearing it, writing in the caption, “In the early 2000s - Apparently, I loved to wear dresses w jeans ... you’re welcome.”

Turns out, this type of outfit is more of a throwback than you might think. It goes far back in history and even has roots in the women’s rights movement.

The appeal of the combo

As is often the case with style trends, the dress-over-jeans look wasn’t confined to red carpets. Non-celebrities embraced this pairing for their everyday lives in the early aughts as well.

“That was definitely one of my go-to looks when I was in high school. I can remember wearing sneakers and bootcut jeans with knee-length frilly dresses, which were often embellished with lace and glitter,” said Sara Idacavage, a fashion historian and researcher in the textiles, merchandising and interiors department at the University of Georgia.

“I think I was attracted to this style because it allowed me to be dressy, but not too dressy,” she added. “I loved wearing party dresses to school, but I don’t think it would have been seen as ‘appropriate’ without the jeans underneath. The dress-and-jean combo helped me look like I wasn’t trying too hard, which is actually why I think the look was popular with female celebrities at the time.”

Besides balancing between dressy and casual, the juxtaposition of super feminine dresses with denim also offered “a cheeky way of playing with gender norms,” Idacavage said, adding that the trend coincided nicely with the third-wave feminist movement and allowed women to channel a little rebellious spirit.

On a practical level, wearing a dress over jeans allowed for more freedom of movement since it erased fears of accidental flashing or Marilyn moments. It also allowed Disney stars such as Ashley Tisdale and Miley Cyrus give their outfits a more wholesome vibe at the time.

The history of the look

Today, we might chuckle at old photos of celebrities wearing dresses over trousers — but back in the mid-19th century, this combo was downright scandalous.

“In 1850s America, women’s rights activists such as Amelia Jenks Bloomer and Elizabeth Cady Stanton horrified polite society with their controversial pairing of what at that time were two distinctively gendered garments,” said Cassidy Zachary, a fashion historian and co-creator of the podcast “Dressed: The History of Fashion.”

The dress reform movement, aka the rational dress movement, took off in the United States and parts of Europe during the Victorian era when women wore heavy dresses and restrictive corsets, which led to overheating, difficulty breathing, tripping down the stairs, crushed organs and other medical issues. The goal was to liberate women from attire that directly harmed their health and limited their freedom.

“These early suffragists intended their adoption of a calf-length dress worn over a pair of loose-fitting ‘Turkish trousers’ or ‘pantaloons’  to be a comfortable and practical alternative to the cumbersome floor-length skirts then in vogue,” Zachary said, adding that the controversial choice was perceived as a direct assault on the strict gender norms that divided women from men and regulated their lives.

“Dress-and-pant-wearing women became the subject of international ridicule, with innumerable satirical prints mocking a farcical world where gender roleswere reversed: Women smoked cigars and proposed to men who stayed home, cooked, and took care of the children,” she continued. “It is amazing to consider how many social anxieties were embodied in this one garment.”

The ensemble of trousers gathered at the ankle under a loose dress was often referred to as a “bloomer” costume, named for the aforementioned activist, who popularised the look with her enthusiastic articles on its benefits in her newspaper, The Lily. 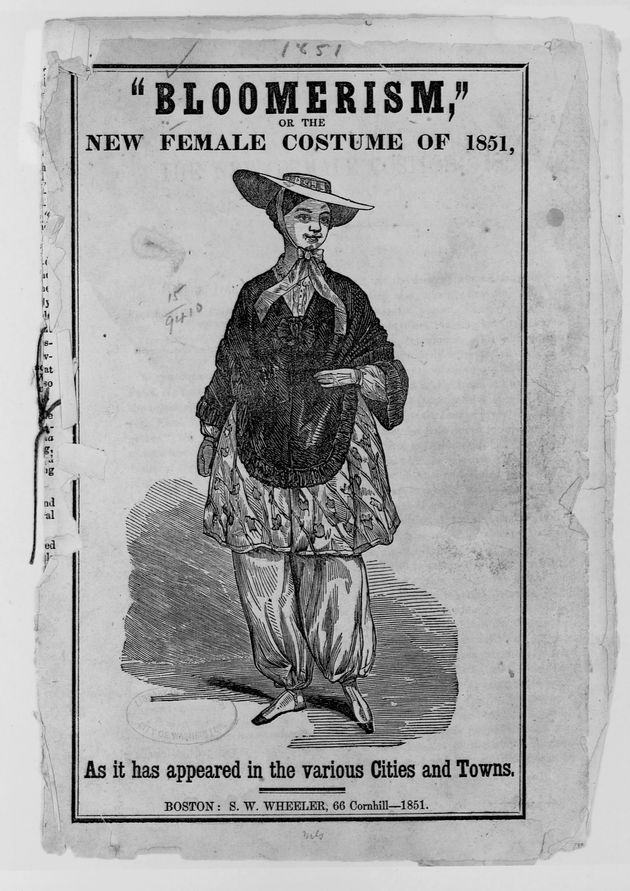 “Bloomer costumes echoed the full silhouette that was popular in Western fashion at the time, but allowed for greater comfort and ease of movement by swapping layers of heavy petticoats for loose pants,” Idacavage said. “Aside from the obvious differences in materials and silhouettes, I think the bloomer costume is actually quite similar to the dress-over-jeans look of the early 2000s!”

Ultimately, the hoopla around this ensemble made activists like Bloomer concerned that their bid for comfortable attire was distracting from the bigger cause of women’s rights, so they eased away from the rational dress aspect of the movement.

While the dresses-with-trousers trend was a notable moment in the West during the mid-19th century, women were actually wearing dresses and tunics over trousers long before that era and in many other parts of the world.

Back in the West, American and European women wore trousers with dresses to costume parties for many years before suffragists adopted the combo for their everyday wardrobes.

“You can find fashion plates from the 1810s that depict women wearing full trousers called ‘pantalets’ or ‘pantaloons’ underneath calf-length dresses. The style wasn’t extremely popular or considered appropriate for daily dress, but it did exist,” Idacavage said.

The historian added that 19th-century childrenswear for both boys and girls often consisted of short dresses over pantalets as well. Additionally, American women often wore pant-and-skirt ensembles at swimming and water-cure establishments.

“Dresses over pants were also worn by women living in certain religious and utopian communities in the US. long before Amelia Bloomer popularised the look,” she continued. “It was also accepted as proper attire for women participating in sports throughout the 19th century, although wearing it outside of gymnasiums is a very different story!”

The future of dresses over trousers

As with the “going-out top” and other early 2000s style trends, the dresses-over-jeans look faded over time. But it seems this pairing may be making a comeback in the 2020s.

Lately, many runway shows and style influencers have sported long tunics and dresses over trousers, including jeans. But these looks have an updated vibe with long shirt dresses unbuttoned at the bottom, monochrome combos, minis with volume, layered looks and more. 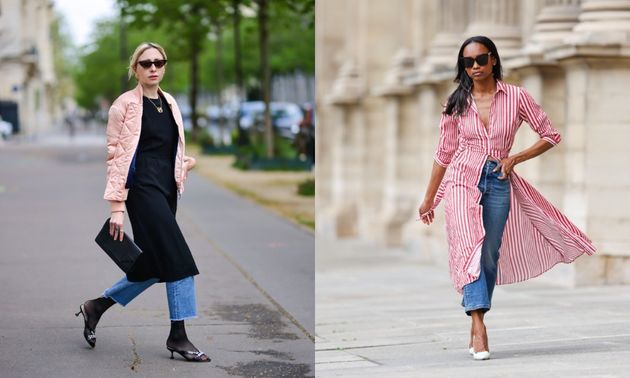 But Zachary believes the more pertinent conversation right now is less about the way women style their dresses with trousers and more about how those who don’t identify as female might do the same.

“My question is this: With women flaunting their right to wear both garments by the 2000s, when will the same be said of her male or nongender-conforming peers?” Zachary said.

“It’s 2021, and while the pant has inarguably lost its gendered status, the same cannot be said of the skirt and dress, although we are seeing promising strides,” she added. “From actor Billie Porter’s crinoline tux gown at the 2019 Oscars to nongender-conforming artist and activist Alok Vaid-Menon’s #DeGenderFashion movement, I hope the next resurgence of the dress-pant trend will be one worn and enjoyed by all.”