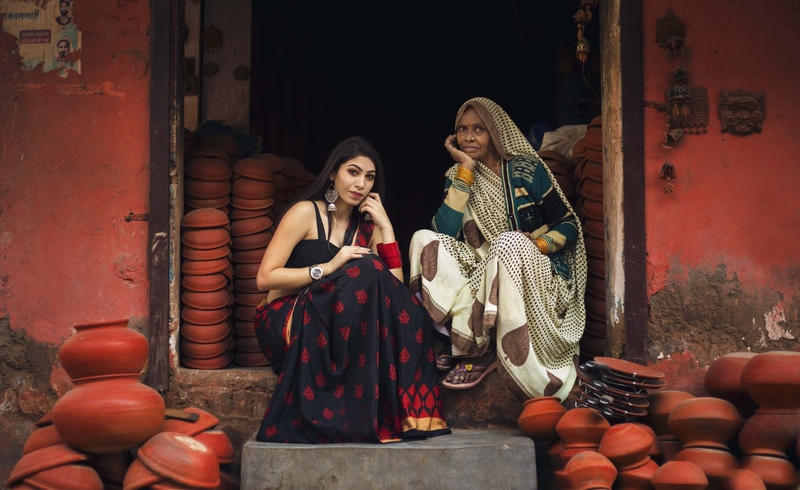 Three drops of blood splatter on the skirt from Shai’s thumb as she smiles to herself gazing at her crush’s picture on Instagram, this stems from a place of insecurity as she realizes she still hasn’t gotten her periods yet, unlike her peers. This is a scene from the critically acclaimed show, Bombay Begums. Social media forcefully feeds narratives to adolescent and pre-pubescent girls around the world. There have never been studies to illustrate it’s effects on girls in India, since it has shifted the global focus to only the USA and Western countries, hindering citizens of other countries to look at their homeland and neighborhood first. Peer pressure and romanticized body image portrayals inherently creep into the psyche. Despite body positivity movements being widely present, they later morph into body terrorism which consequently affects everyone. Parents play a pivotal role in feminism by feeding us narratives of superficial maturity, their orthodox and regressive ideologies leaving behind harmful stigma which unconsciously affect your life decisions in visually trivial but significant in terms of its effects. Flipping the coin, we notice toxic positivity in progressive mentalities. In terms of feminism, toxic positivity would be constantly egging each other on, not holding each other accountable, promoting actions and ideologies which are anti-feminist but disguised as the feminist movement.

Here’s the thing, feminism has principles, life has compromises, things are very different on the ground level. When we are put in situations that make us explore our morals and ethics, whatever we are taught by social media turns to dust and we turn to the basic ideas which we are taught, should we stay true to ourselves and not take advantage of the situation even if we might lose a good chance of doing better in life or should we forget principles and do what is the best of us, even if it’s at the expense of those whom we care about or our competitors? If we look at diverse cases of assault and structural inequality and take an intersectional approach, we’ll conclude that one cannot beat the system by going against it, a more mindful and realistic approach would be to identify the faults in the system, manipulate it and use it for the benefits of ourselves and others. Most of the time, if women want to achieve something to be looked at as a powerful or an ideal figure, they have to sacrifice a lot of things which will cost them a great deal, either financially or morally, and hence this is The Price Of Sita.

Eurocentrism has crept its way into the crevices of mass media and entertainment as well. While it is a fact that the big awards such as The Oscars and The Grammys are racist and misogynistic, these prejudices affect non western media the most. The diaphragm of euro centric views pertaining to movies and shows, from an Indian perspective, has completely diverted the audience’s attention to worthless and overhyped mediocre western shows, rather than focusing on pathbreaking and vivid, real stories by female indian directors, producers and actors. To provide examples, The Kissing Booth, Fifty Shades of Grey, 365 Days gathered million times more attention than brilliant movies such as Nil Battey Sannata, Angry Indian Goddesses, Badhai Ho, Margarita With A Straw, Lipstick Under My Burkha and shows such as She, Delhi Crime, Made In Heaven and Bombay Begums. Even if female centric art has garnered attention by the general public, it has been mostly due to unconventional portrayal of sexual desires and challenging stigmas set by the supposedly modern Indian man who has chauvinism deeply ingrained in their mind. That is exactly what masterpieces are supposed to deliver, but, sadly, people would rather watch damsels in distress in white movies rather than stories of powerful women who own their narrative ranging from the markets to doing sex work to support their families to CEOs of multi-billion dollar corporations. Here are some pieces of art which illustrate the same:

The Censor Board banned “Angry Indian Goddesses”, an unfiltered movie about four women navigating themselves through motherhood, same sex relationships, death of a loved one, sexual assault, stereotypical roles of women in Bollywood, daily forms of abuse women have to go through and self defence at the cost of upholding their innate femininity, battling societal pressure, and learning to be accountable by taking matters into their own hands.

A scene in Dil Dhadakne Do, where dormant familial tension boils over and the Mehra’s confront each other on their cruise ship, Kabir(Ranveer Singh) points out to his mother, Neelam(Shefali Shah), that the only reason she didn’t file for a divorce against her husband Kamal(Anil Kapoor) is because she was unemployed and had nowhere else to go to. So, many passively successful women in unhappy relationships continue to enjoy the luxurious life at the cost of their financial independence. Similarly, in the movie Queen, Kangana Ranaut finally realises her worth after travelling alone to her honeymoon. In her dismal flashbacks, we get to see how women have to suppress their desires in order to please the eye of the society, in order to be a perfect wife.

There are many pieces of art which navigate the life of older women in terms of sexual and romantic relationships. In Badhai Ho, the movie fantastically proves that older women can bear children too. In Lipstick Under My Burkha we watch a sexually suppressed widow(Ratna Pathak Shah) gather courage to own her desires and act on them by reading an erotic fiction novel. In Bombay Begums, Pooja Bhatt’s character delivers a groundbreaking portrayal of the complicated sexual life of an older woman in an arranged extramarital affair. In Made In Heaven, we follow the romantic relationship of two senior citizens who get married and the parallel storyline where their children try to accept their union.

There are many other pieces, such as Axone, a raw portrayal of the hardships faced by North-Eastern Indian women on a daily basis in Delhi, or Nil Battey Sannata, a complicated relationship between an uneducated maid, her arrogant daughter and empathetic owner. The fact is that, in every female starring, directed or produced movie/show, every woman always has to sacrifice something or compromise with her ethics in order to gain salvation. Masterpieces like these surround us everywhere, but people never bother to look for them and then resort to ranting about how India’s movie industry is regressive.

Radical acceptance is the first step when we’re a part of a movement. In this case, it is the feminist movement. Rebelling against the system we’re knee deep in will not change anything. In order to move forward, we need to accept rather than refute or justify. The very fabric of society in which we exist is on the precipice of crumbling into chaos. In order to find solace, instead of looking at the West and idolising what the entire world calls “a third world country with a Gucci belt”, we need to explore our own country and uphold it’s culture, traditions, experiences and current conditions. If you don’t show it, it can be erased. Everything comes at a price, instead of worrying about what we’ve spent, we need to think about how we can save.


Need more info? A complete list of benefits is here.

The post The Price of Sita appeared first on The Good Men Project.