It’s hard to describe what it’s like to have a sister to those who lack the experience. But the funny folks of Twitter have come pretty close.

We’ve rounded up 30 funny and relatable tweets about life with sisters. Enjoy!

My sister asked if I stole her cream sweater. Uh, yeah. Who else would've stolen it? You think a burglar broke in and was like "Cute top!"

My little sister just said "I see you're wearing your loser badge... oh wait that's your face" which is a pretty sick burn, except for the fact we have nearly identical faces

shout out to four year old me, who on hearing that i was having a sister suggested the name "iguanadon"

when my parents said "that's not a girl's name," probably hoping i would go with a non-dinosaur, i changed my suggestion to "iguanadonna"

— dissertating yell at me if you see me on here (@HalstedMedieval) March 9, 2020

5-year-old: I found another egg!

Me: Was it in your sister's basket?

If my sister doesn’t stop talking about doing yoga every day for 15 years, she’s finally going to find out who cut the hair off all her Barbies.

So apparently that’s a lifelong thing.

my little sister just caught me crying and she said “do you do this a lot at college? there are people you can talk to about that” and then kinda smiled and said “but not me, i’m tired. goodnight”😅🙂

Trying to breathe through my sister going to my room and taking my brand new bottle of foundation and me only finding out when I am tearing my room apart looking for it pic.twitter.com/W7grZ8q7Bx

my 11 year-old step sister just told my other step sister, “i would roast you, but mom said i’m not allowed to burn trash” 😮😮😮😂

After I see 12 missed calls from my Mum, my sister sends me this... pic.twitter.com/imDM2A9bAY

— grace spelman: spokeswoman for being bad at math (@GraceSpelman) December 26, 2019

My mom found my sisters mini denim skirt look what this bitch tried to say it was 💀💀💀💀💀💀💀💀 pic.twitter.com/O09bhjHQnX

To my neighbor who saw me run out of my sister's house today yelling "son of a bitch!" No need for alarm. Just another family Sunday lunch get together.

I saved a ton of money by shopping sales and using my sister’s credit card.

Found my missing cardigan when my sister posted a FB pic of her wearing it.

Me and my sister wanting to order Chinese at 2.26pm but having to wait till 5pm pic.twitter.com/ZpglMG5X03

My sister has glued glitter to 6 wine glasses, 3 lamp shades, and multiple candles.

I’m scheduling an intervention before she finds the cat.

My sister got my 5 year old some glitter slime- that’s right, it’s got glitter AND it’s slime.

She has kids of her own, so it must be that I wronged her in some life-changing and tragic way.

So I’ll be over here trying to figure out what I did to her.

Growing up with a sister:
“Is that my shirt?”
“Stay out of my closet”
“Take my clothes off”

It’s my sister’s birthday in a couple of days and I am reminiscing about all the fun we used to have. #sisters#humour#laughteristhebestmedicinepic.twitter.com/Hdci9bnshi 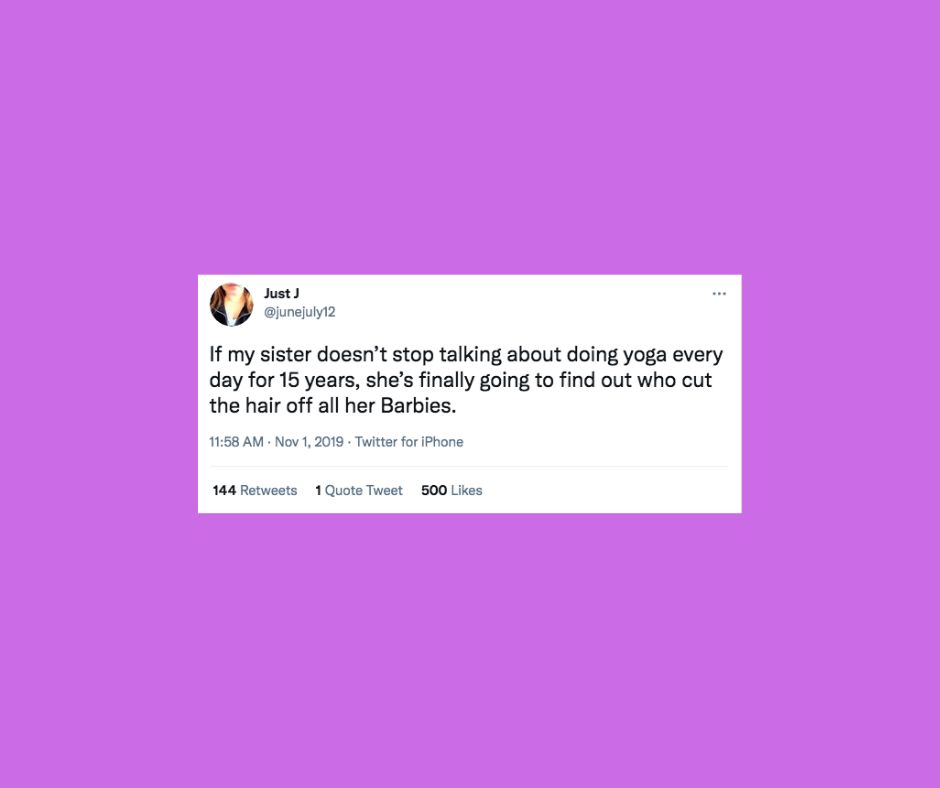 Her Christmas past had come back to haunt her... The Mistletoe Contract by Jennifer Chastain
January 18, 2022