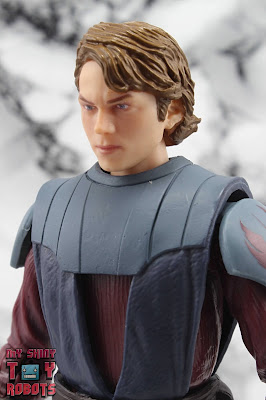 Release Date: May 2021
RRP: $24.99/£24.99
In commemoration of Lucasfilm's 50th anniversary Hasbro have been touching some of the more forgotten (at least in the eyes of Disney and its revised canon) elements of the Star Wars franchise, but that doesn't mean they don't have the energy for a little more Star Wars: The Clone Wars love. Hot on the heels of special book-style releases revisiting various parts of the "Legends" canon, these Target-exclusive (or via the fan channel outside the US) Black Series figures are a real celebration of the seven-season series that did so much to expand on the Clone Wars and the prequel era as a whole. And one of the characters it did the most of all for was Anakin Skywalker, helping to flesh out his time as a Jedi Knight in the lead up to his eventual fall to the dark side. With his costume as it appeared in the animated series still unrepresented, this is the perfect time to welcome this particular Black Series Anakin Skywalker into the line. 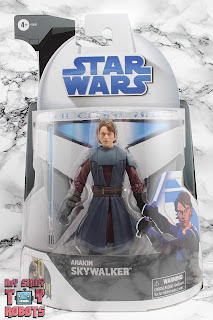 Each figure in this wave comes in special Star Wars: The Clone Wars style packaging, based on that of the original 3.75" toy line from 2008. This card/bubble packaging features a Phase 1 clone trooper shaped card back, with a rounded blister and inner card sporting the character name/artwork as well as the Lucasfilm 50th Anniversary logo. It's a pity that you have to physically cut the bubble apart to get at the toy (unless you want to meticulously play with heating the glue that is), but the nostalgic element of it is cool nonetheless. It's just a shame that the card itself is so generic, sporting the name of the character but otherwise no defining features about them otherwise. Instead all you get is the basic Star Wars franchise timeline they've included on all these 50th anniversary Lucasfilm releases, along with all the usual product information and jargon. 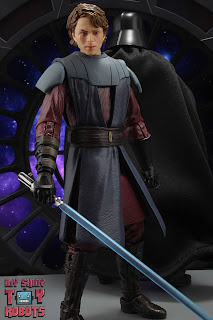 This whole wave of Clone Wars figures has been an interesting mix of existing body parts (with a bit of new moulding thrown in here and there) pulled together to create what feel like all new figures, and while this is true of Anakin his composition is arguably a little more straightforward. The arms and legs come from the Revenge of the Sith version of the character (although the left arm has been remoulded to be gloved), while the torso, head and shoulder pauldrons are brand new pieces. Like Obi-Wan the torso has been covered in soft plastic Jedi robes, which feature a painted armour piece at the top. Whereas Obi-Wan's is just a straightforward "clone trooper white" colour, Anakin's is a light grey to match the pauldrons fit better with the dark grey of the robes. The soft plastic robes continue down to create a skirt-like piece around the hips, and surprisingly there's even a burgundy fabric skirt piece under that as well! The shoulder pauldrons are an interesting design too – not attached directly to the arms but instead looped around the pegs to give them floating movement. Between all this and the colours/paint apps there's quite a lot going on with Anakin, but we really need to address the elephant in the room – that head sculpt. The Black Series has always opted for more realistic looks on animated characters so that they'll fit in better with all the figures from the live action parts of the franchise, which makes perfect sense. For characters that appear in both animation and live action (for example, Obi-Wan or Bo-Katan), they'll just go with a live action sculpt. This new Anakin however is a real oddity. It looks as though Hasbro have tried to blend both Hayden Christensen's likeness and Anakin's animated appearance, and the result is something that struggles to get across either. This thing looks more like Tom Holland than it does Hayden Christensen. While I appreciate new parts being added to the figure to make it a little more unique, a new head sculpt is a little baffling when there was a perfectly good Revenge of the Sith one right there. 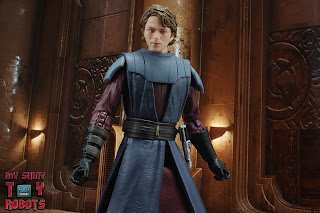 Articulation is another strange mix of old and new, and pretty much completely opposite to Obi-Wan in how it's all laid out. Altogether Anakin features;
- Ball jointed head, neck, waist and hips
- Swivel hinge shoulder, elbows, wrists and ankles
- Butterfly joint shoulders Double hinged knees
While double hinged elbows were a staple on the old trooper mould, unarmoured figures tending to stick with the swivel hinges we had now which is why Anakin's elbows and knees don't match. In most cases it would be a joy to get that extra bit of articulation back in the knees, but honestly with the layers of robes Anakin has around his waist it doesn't actually make all that difference. On the other hand, those robes don't restrict the hips half as much as you'd expect them to – even with the fabric piece hiding underneath the soft plastic there's plenty of range in those legs to pull off some decent poses. And as small as the movement the butterfly joints add, the fact they're even there in the first place make a world of difference. Since the shoulder armour is free-floating it doesn't really get in the way of the arms either, lifting and staying in place whenever they're raised. 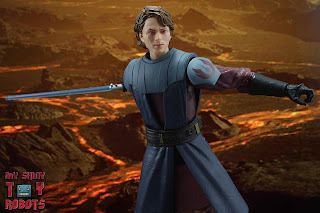 Much like his master, Anakin only comes with a single accessory – his iconic lightsaber complete with removable blue blade. With the blade removed, the hilt can also be pegged onto the figure's belt for that little extra bit of accuracy. Other than the fact it has a sizeable peg sticking out of it the hilt is really nicely moulded – completely with all the correct paintwork to really make it pop. As a result of the hilt being a bit chunkier than Obi-Wan's, the blade is also thicker too so it doesn't feel quite as fragile – the peg piece to plug it into the blade is also a little bit longer as well. That's all you're getting so there's no real surprises going on here, but at the same time since it tracks with all the other Black Series Jedi releases there's been over the years you're not really left wanting more either. 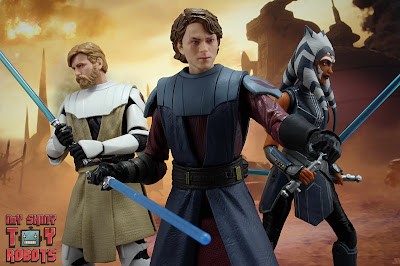 The Clone Wars version of Black Series Anakin Skywalker had every chance to be another surprisingly good figure in this exclusive wave, but wow did Hasbro really miss the mark with that head sculpt. Even with all the good things this figure does (arguably being the best mix of old and new parts out of all four), it's hard to get past an Anakin Skywalker figure with only a vague resemblance to Anakin Skywalker. Even more so when Hasbro already have plenty of practice with this character. Given the slightly higher price point of these figures (which in the few months since has just become the standard price for the Black Series), it's a shame they couldn't have done even a little better with the likeness. Nevertheless this is a kick ass costume for Anakin, and Hasbro did a really good job both layering it and making sure all the parts worked without impacting on the articulation too much. If like me this is your preferred version of Anakin then you probably won't hesitate to pick this up, but a simple head swap might go a long, long way.

How to find discontinued cosmetics
November 27, 2021

13 Bra and Underwear Black Friday Deals That You Need To Swipe ASAP
November 26, 2021