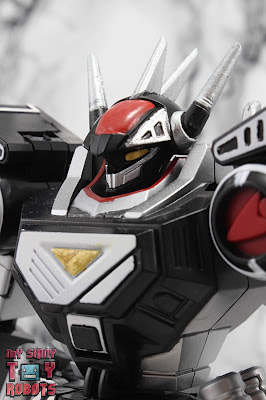 Release Date: April 2021
RRP: 5500 yen
For the most part the Super Mini-Pla range has done a good job of covering the various mecha from each Super Sentai series, but when it comes to some of the older series there are a lot less options to choose from. In some cases (such as Taiyo Sentai Sun Vulcan for example) you might even only get the main mecha and its giant carrier vehicle. However for the Choudenshi Bioman range Bandai really went the extra mile, and on top of those releases also produced something that was LONG overdue a new toy. The mecha of the Anti-Bio Union piloted by their robotic assassin Bio Hunter Silva, Balzion is a villainous counterpart to Bio Robo that appears in the final three episodes of the series. Having received no toys when Bioman was airing back in 1984 and since then only a giant vinyl figure in 2017, the Premium Bandai exclusive Super Mini-Pla Balzion is a truly exceptional release. 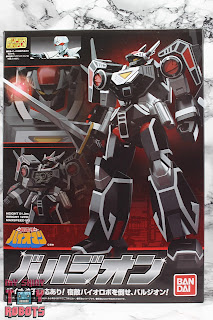 With no classic DX toy to draw influence from, Super Mini-Pla Balzion's packaging had to be designed completely from scratch and that really shows with how different it feels from everything else the line has done. Rather than the usual sealed boxes that need to be ripped open from the top, Balzion comes the typical two-part box commonly used for most model kits across the world. All the graphics are printed on the top/lid part, whilst the bottom half is just a plain white colour. Despite being all new the design team have tried to replicate the style of DX toy packaging, with plenty of images showing off the completed Balzion kit (albeit it a render rather than the actual toy) on the front and sides of the lid. There's even a picture of Bio Hunter Silva hidden away in the top corner, just to link it to a specific character much like how the main mecha always have team/ranger images on them as well. Open the box up and you'll find the pieces needed to assemble the model kit spread across a number of different coloured runners (included a select few pre-painted parts), the building instructions and a single piece of the usual soda flavoured candy. 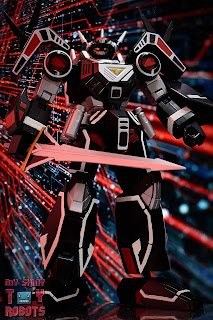 Balzion is unique among the currently released Super Mini-Pla Super Sentai releases not only because it's the only villain robot in the line, but also because it's the only one that doesn't transform or combine with anything else. It's essentially just a big spiky robot, and as such the whole building process feels very different than what fans of this range will be used to. In fact it feels more akin to building a Gundam (or similar mecha model) kit than it does a Super Sentai robo, with the way you build each part of the body separately and then connect them altogether at the very end. It isn't completely identical to a Gundam since it lacks the soft plastic polycap pieces, but it's very similar nonetheless. It's nice straightforward build that could act as a nice primer for "standard" robot kits if the builder has never ventured outside of Super Sentai before, but unfortunately Balzion is a bit of a sticker nightmare. Considering this is a Premium Bandai product there are an awful lot of stickers involved in completing this kit, most of which are those angled white line pieces that adorn most of the body. There are some painted pieces in this release (a couple of which do have those same white lines), but the sticker sheet is bigger than most five-piece combiner mecha the line has been putting out. Thankfully all of this detailing has been properly moulded onto the figure, so all if that sticker detail can be painted on if you'd rather (everything on mine is painted with the exception of the green sticker on the shield). With so many white lines that's a fair bit of work as well, but at least the pieces have all the guidelines moulded on to show you exactly what should be painted and what shouldn’t.
Completed Balzion is a fantastic looking model kit, and through its near-identical colour scheme to Bio Robo definitely feels like the perfect evil counterpart. While it bears a solid resemblance to the onscreen version there have been some liberties taken to make it look more like a robot than the actual suit – the head for example is slightly smaller and sits within the collar area more comfortably. There's a fair bit of grey plastic on the kit that stands out far better with a silver spray as well, but even if you were to simply assemble the kit without making any additional modifications it's a very strong figure that definitely stands out amongst all other Super Sentai mini-pla. 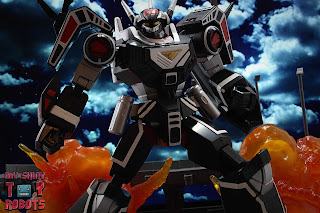 The other advantage to not transforming or being a component of something bigger is that there's no mechanics involved that'll get in the way of articulation either. On top of just being a really solid robot model kit to build, Balzion is a really solid model kit to pose as well. Altogether the kit features
- Ball jointed head, waist, wrists and ankles
- Two-way rotating shoulders with reversed butterfly movement and hinged shoulder pads
- Two-way rotatable hips for forward and outward movement
- Double hinged elbows and knees
- Single hinged shins
- Moveable skirt pieces
With Super Sentai kits there's always some worry about how everything will hold together in the combination and be able to pose well, but there's none of that at all with Balzion - every single joint holds together tightly to allow for some seriously brilliant poses. Even with those ridiculously huge shoulder pad sections the arms don't have any significant obstructions. That backward butterfly movement is an interesting choice, but adds an extra dimension to the posing. An additional feature Balzion has is that the chest compartment can open to reveal its powerful Anti-Bio Particles Cannon Beam, a pre-painted gunmetal grey piece with plenty of sculpted detailing. Even if it can hold its own in melee combat, you certainly don't mess with something that's hiding that sort of firepower. 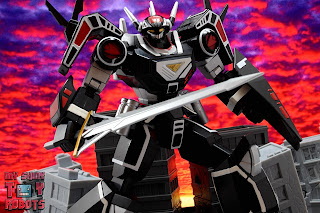 Balzion's accessories include two swappable pairs of hands (open and weapon-holding fists), an arm mounted shield and the Balzion Maser sword. The shield can be mounted on either the side or back of the left arm, but when attached to the side the proper way it's supposed to go (with the extended half facing upwards) is extremely unwieldly because of the huge shoulder section. The shield itself may be on a rotatable hinge to try and resolve it, but arguably it looks far better (not to mention more practical) when inaccurately fixed upside down. The Balzion Maser comes mostly pre-painted, with the exception of the black triangles at the bottom of the blade where it meets the hilt. It's a relatively simple looking sword, but the design is a good counterpart to Bio Robo's own Super-Maser. The sword simply slots into either of the designated hands without any need to take it apart and reassemble like with some other Super Mini-Pla releases. All in all it's a pretty basic set of accessories, but does the job very well for a mecha that had a limited appearance within the show itself. 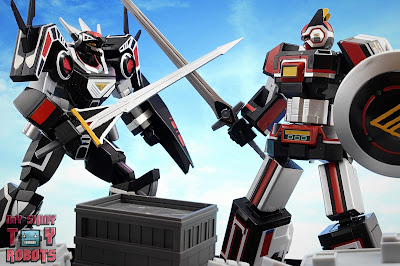 Super Mini-Pla Balzion is very significant release in this extremely popular range of model kits, not only because it's the last Super Sentai release to be released under the "Super Mini-Pla" banner (the Gaoranger releases moving to "Shokugan Modelling Project" instead) but also because it shows Bandai's willingness to produce sets that didn't necessarily have toys back when the show was originally airing. Despite feeling quite different to your average Super Sentai mini-pla Balzion is an extremely fun build with plenty on offer, however the sheer amount of stickers it requires does feel a little underwhelming for a Premium Bandai product. Although it's likely to be one that more casual Super Sentai fans end up skipping, it's unique charm and the sheer novelty of getting a villain mecha for once definitely make it worth your while.

Strategies for Achieving High End Looks for Less.
May 18, 2022