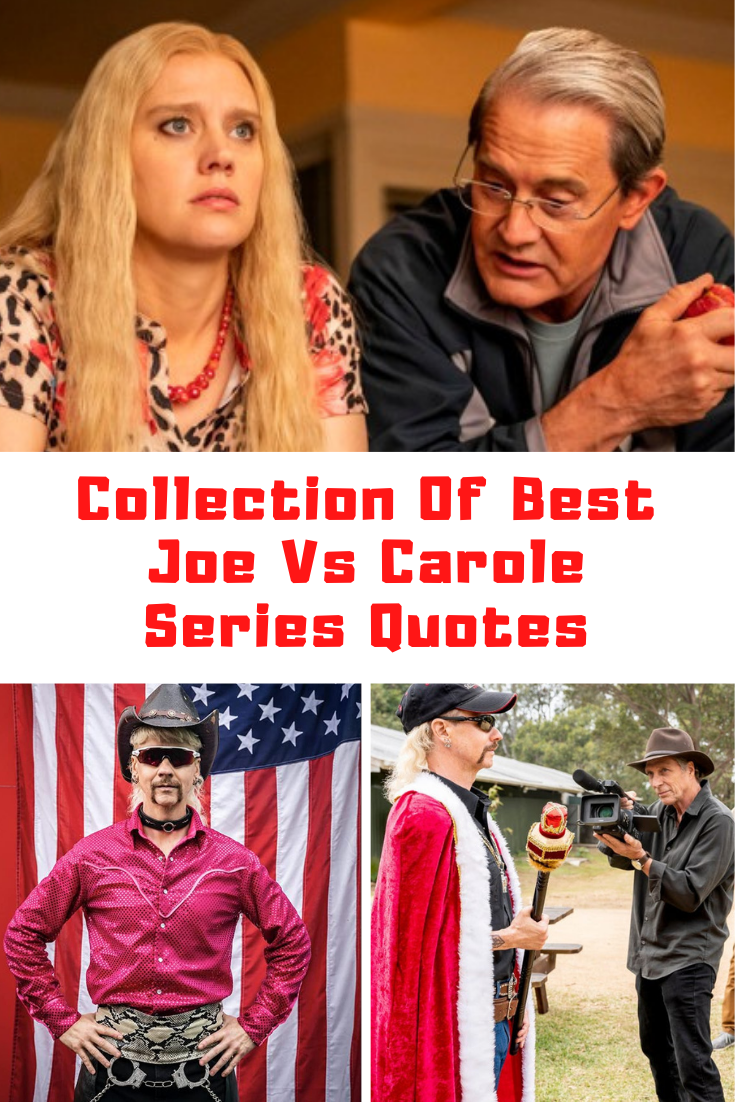 Peacock’s Joe Vs Carole dropped on the streaming service this past Thursday, March 3rd. I will have a review of the series coming soon, so make sure to stop back by to check it out. It will be linked down below. In the meantime, I wanted to share a list of some of the best quotes from the show. Check out these 90+ of the best and most shocking Peacock’s Joe Vs Carole quotes.

If you enjoyed these Joe Vs Carole quotes, check out these other articles: Hulu’s The Dropout quotes, The Boys Presents: Diabolical quotes, The Batman movie quotes, A Madea Homecoming quotes, No Exit movie quotes.

We have reason to believe a hit has been put out on you.

He’s a psychopath who wishes me dead.

He ordered my murder, Howard. Like it was a pizza from Little Caesars.

Unless you can magically pull a tiger out of your a**, you’re screwed.

I’m going down all right, but your ugly a** ain’t gonna be on the other end of it.

Mr. Exotic is my father’s name.

I’m a graduate from Google University.

You need a bench or something?

She’s got a whole website trying to take you down now.

This ain’t Sea World, this is my world.

Well, then you ain’t that straight.

That’s “cat” for we need help.

Hey all you cool cats and kittens.

He learned a first lesson of tangling with my brilliant wife, it does not go well.

She got to every mall and fair within a thousand miles.

Today it was Joe Exotic. Tomorrow, I’m going to go after all the rest.

You ever heard a hungry cat roar? It’s like to break your heart.

Look who it is, resting witch face.

I don’t choose who I go after, Howie. They chose me.

I got bigger t*ts on my plate.

I was gonna kill myself, drive myself off the bridge.

Being out is a hell of a lot better than being dead.

I would hate for money to stand in the way of doing the right thing.

Are you even attracted to me? 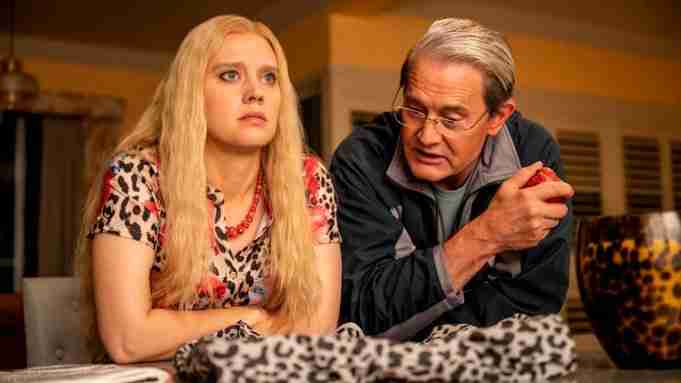 I think this thing we have could be real.

I say the cats justify the means.

I thought it was about d*mn time me and her broke bread together.

You ever pet a tiger before? Or a tiger’s owner?

There is a cost going to war, even if you didn’t start it.

No one’s going to make me feel small again.

We are swatting at flies.

There needs to be a law against private ownership of big cats in this country.

It’s like we pulled up our skirt but nobody wants to see our p*&&y.

I heard you got yourself a zoo baptism.

He’s a piece of excrement in human form.

Give me some of that sugar.

I just want some f*ckin’ Fungins.

I have the connections, you have the story. America is gonna love you.

I’m serving up breakfast with a side of justice.

This is starting to feel a little woo-woo.

What you think about, you bring about. 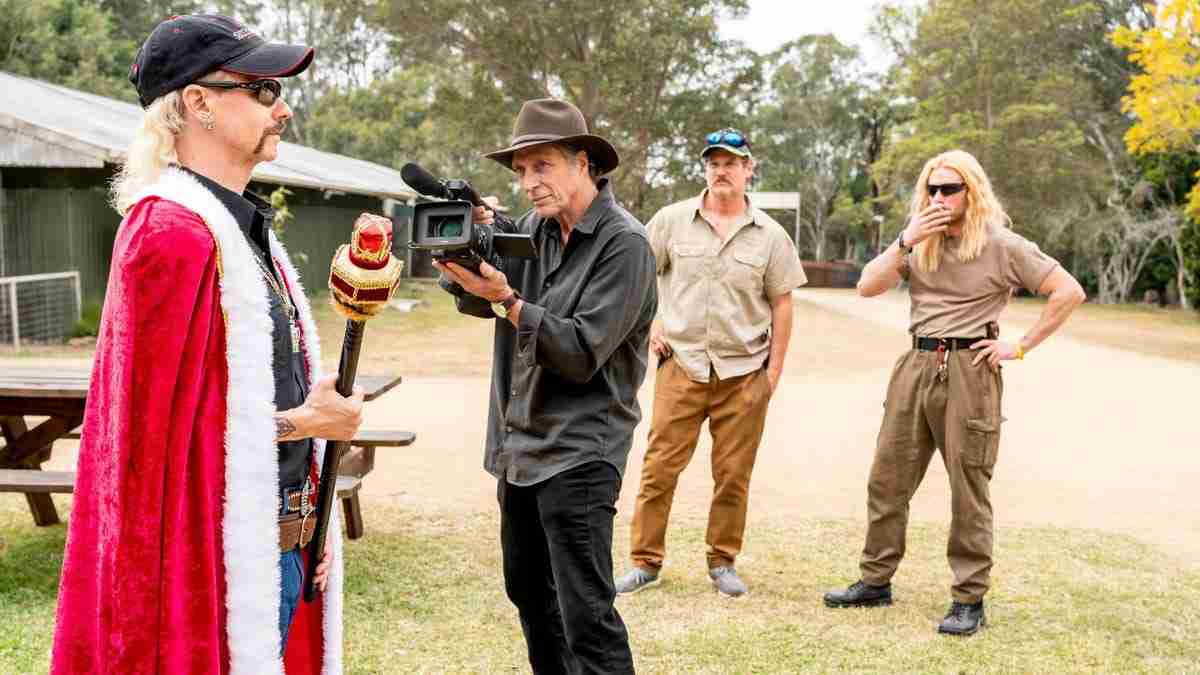 If you’re gonna puke, do it the other way. I got good money spent on this hair.

I am the Tiger King.

I guess whatever Joe wants, Joe gets, huh?

That’s the gayest sh*t anyone’s ever said at this zoo.

Cause you taking two up your a** has made you such a delight.

Ain’t nobody watch Duck Dynasty for the ducks.

Mark my words. Carole Baskin Before this is over, you will stop breathing.

Joe Exotic is the craziest motherf*cker I’ve ever met, and I can promise you, America is gonna love him.

Ain’t nothing free at this zoo.

You don’t love people, you collect them.

Cats don’t want to rip your heart out and stomp all over it.

This is my daughter, and she came to watch me castrate your business.

Wink at my kid one more time.

They connect with me cause I am exactly what I say I am.

Is that lock on the gate to keep people out? Or to keep us in?

You don’t know why you don’t like me, but you just don’t.

Maybe they wanted to leave Neverland, but they just couldn’t find a way out.

Can’t fire unless there’s a clip in it.

We all want fairy tales to end happily.

The truth is, the real world is full of poison apples and dragon.

In the real world, you gotta fend for yourself. And there ain’t no fairy godmother to save you.

Happily ever my a**.

I told myself I wasn’t going to cry, but I feel like I got a hole in my heart.

I swear to God, someone’s gotta kill that b*tch.

Soon as you do this, I’m gonna get back everything that b*tch has taken from me.

Are you trying to get into my pants?

We had a f*cking partnership.

I don’t know what that guy is guilty of, but he is definitely guilty of something.

He made his bed.

I feel lots of things, but bad for Joe ain’t one of them.

You ain‘t on Grindr, are you?

You gotta put your big boy pants on now, Dillon.

That prosecuter b*tch made me seem like some Yosemite Sam on meth.

World can’t be all bad with you in it.